The state government will award Mirabai Chanu Rs 1 crore for her silver medal at the Olympic Games and has assured her a government job in Manipur. 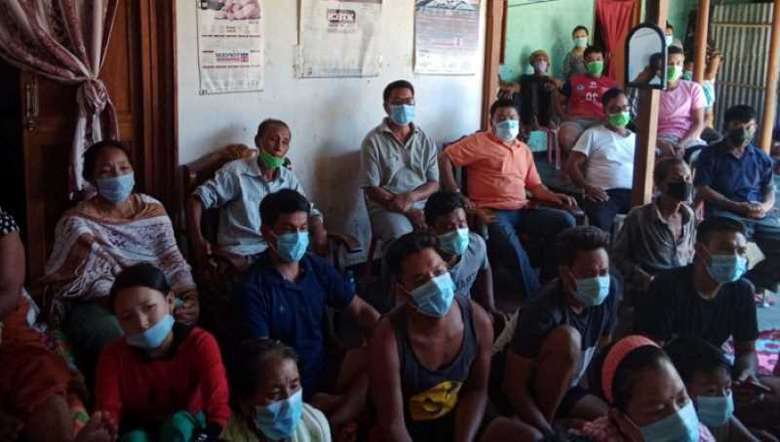 Tears of joy rolled down the cheeks of young and old alike at Saikhom Mirabai Chanu’s household in Imphal East as she makes the final lift during the Women's Weightlifting 49 kg category in the Tokyo Olympic Games 2020, to clinch the silver medal, India's first medal in the event.

The state government will award her Rs 1 crore for her silver medal at the Olympic Games and also assured her a government job in Manipur.

The historic moment will be remembered when Saikhom Mirabai Chanu grabbed the silver medal, bringing wild raptures of joy and fulfilment to everyone present at her household at Nongpok Kakching Village in Imphal East, which is around 23 kilometres away from Imphal Town.

However, the fanfare was limited due to the restrictions as well as curfew imposed in the state due to the rapid rising case of COVID-19 pandemic.

Mirabai’s mother S Tombi Leima while regaining her posture said, “It is a proud moment for me and for the whole village as she was able to achieve her goal of bagging an Olympic medal. And I am especially happy that my daughter was able to get India's first medal in the Tokyo Olympic Games.”

She further added that Mirabai Chanu had finally realised her dream today as her previous experience at the Rio Olympic was not a fruitful one. She truly deserves all the kudos because she had worked for it.

Mirabai was very studious from the beginning, her mother S Tombi said. She never complained and would eat whatever I could find for her. I ran a little hotel and the main diet for her was eggs as that was all the family could afford at the time.

Mirabai Chanu lifted 87 kg in snatch and 115 kg in clean and jerk to give a total of 202 kilogram for the silver medal. Chinese weightlifter Hou Zhihui grabbed the gold and Indonesian weightlifter Windy Cantina Aisah fetched the bronze medal.

Also Read: It’s a dream come true for me, I thank the billion prayers of all Indians: Olympic medallist Mirabai Chanu

It may be mentioned that she currently holds the World record in Clean and Jerk, lifting a total of 119 kg. Mirabai Chanu is employed at the Indian Railways.

Saikhom Mirabai Chanu took to weightlifting in 2006 as a trainee at the Regular Coaching Centre conducted by Youth Affairs and Sports, Manipur at Khuman Lampak. She was tutored by Dhyan Chand awardee coach, L Anita Chanu, who herself was a reputed International weightlifter.

In her early days of training, Mirabai Chanu and one of her friends used to hitchhike sand and rock laden trucks while coming for training from her village to Khuman Lampak.

One of the truck drivers, Ropen Singh said, “We feel extremely happy on her success. It is her sheer dedication, hard work and commitment that she showed, which brought a smile to everyone's faces at these hard times of COVID-19 pandemic.”

In the meantime, Chief Minister N Biren Singh has lauded her effort of winning India's first medal in the Tokyo Olympic Games.

During a video call to her, the chief minister said, “The people of the state and country as a whole are very proud of her for winning the silver medal, which is a no mean job in such a magnitude of competition. As assured, the state government will award Rs 1 crore and a suitable government job in Manipur.”

Biren Singh added, “We know that you are employed at the Indian Railways but we would like to offer you a more suitable job here in the state. We are indebted to you, your coaches, club members who moulded and shaped you to such great heights.”

Mentioned may be that the state government had announced a cash reward of Rs 1.2 crore for gold medal, Rs 1 crore for silver medal and Rs 75 lakhs for bronze medal for athletes in the Olympic Games.

"Today is a great day for all of us in the country as one of the athletes of the Indian contingent has picked up India's first medal. Saikhom Mirabai Chanu, belonging to Manipur, has done us proud, winning the silver medal in Women's Weightlifting 49 kg category in the Tokyo Olympic Games. We are very proud and congratulate her on her success and hope that more and more medals are won by Indian contingent in the mega event,” the MOA president said.