It’s a dream come true for me, I thank the billion prayers of all Indians: Olympic medallist Mirabai Chanu

Saikhom Mirabai Chanu from Manipur won the silver medal in the women’s 49 kg weightlifting at the Tokyo Olympics 2020.. 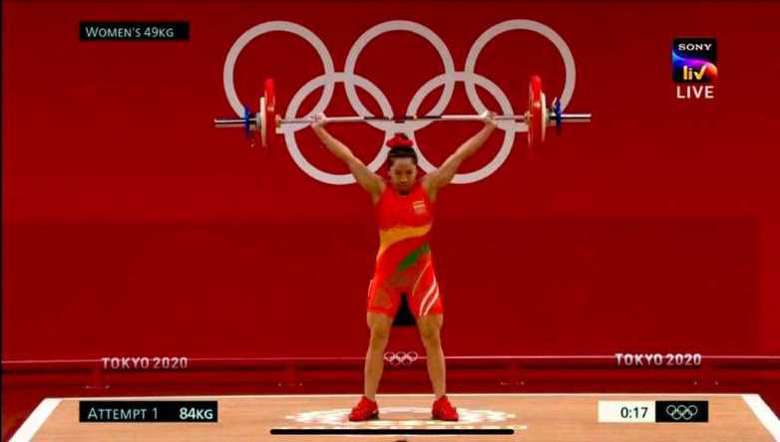 “I am really happy about winning the silver medal in #Tokyo2020 for my country. It’s really a dream come true for me. I would like to dedicate this medal to my country and would like to thank the billion prayers of all Indians which were with me during this journey.

“I like to thank my family, especially my mother for a lot of sacrifices and believing in me. Also special thanks to our government for supporting me, the Ministry of Sports, SAI, IOA, Weightlifting Federation of India, Railways, OGQ, sponsors and my marketing agency IOS for their continuous support in this journey.

“I would like to give special thanks to my coach Vijay Sharma sir and support staff for their continuous hard work, motivation and training. Thank you once again the entire weightlifting fraternity and all my countrymen. JAI HIND,” Mirabai Chanu tweeted.

Mirabai won the silver medal by lifting a total lift of 202 kilogram in the women’s 49 kilogram weightlifting.

The Mirabai had already registered a new world record in women’s weightlifting 49 kilogram category by lifting 119 kilogram in clean and jerk earlier on April 17 this year during the Asian Weightlifting Championship.

When IFP visited the family of the Olympic silver medallist located at Nongpok Kakching, Lamlai assembly constituency, Imphal East district which is about 20 km from Imphal, Mirabai’s mother, Saikhom ongbi Tombi said, “We expected a gold medal, however, I am very happy that she won a medal for the country.”

“She made a video call this morning at around 6 am seeking our blessings before she went for weightlifting. All the family members gave blessings to her to win a gold medal,” she added.

Mirabai’s father, Saikhom Kriti, who is working as a muster-roll at the Public Works Department, said that he is proud to be the father of Mirabai.

Responding to IFP, Kriti said all the people were expecting for gold medal but winning a silver medal is also good for the country. He said that the family has been supporting Mirabai to become a sports person. During the initial period while stepping into sports, she went through various issues regarding lack of proper food supplement. However, with her interest in sports she started her career by eating indigenous locally found foods, mainly vegetables. Now, her potential, dedication and hard work have become fruitful and she has won a silver medal in the Tokyo Olympics, he added.

Advisor of Bright Star Union (BSU), a local club of MIrabai’s birth place, Naorem Rabi said that the people are ready to receive the silver medallist with celebrations when she comes back home.

Chief Minister N Biren in his Facebook page posted “What a day! What a win for India. Saikhom Mirabai Chanu wins Silver in Weightlifting Women's 49 kg category. India has opened its medal tally in the Tokyo Olympics. You have made the country proud today. Bravo.”

“I’m filled with so much pride for our athletes from Manipur today. Hailed from a humble family in a small village called Nongpok Kakching in Manipur, Saikhom Mirabai Chanu has made all of us proud today with her grit, resilience and hard work. Mirabai is an inspiration to our youths.”

The chief minister also told Mirabai in a video call posted in his Facebook page that he had informed the Central government about her achievement that she opened the medal tally for the country with a silver medal. In the video conference, Mirabai expressed her gratitude to the people of Manipur and India.

It may be mentioned that the state government had announced to give Rs. 1.2 crore for gold medalist; Rs 1 crore for silver medalist and Rs 75 lakh for bronze medalist in the Tokyo Olympics.