The Manipur chief minister said to meet the challenges posed by water scarcity, the state government has projected to bore irrigation tube wells under PMKSY. 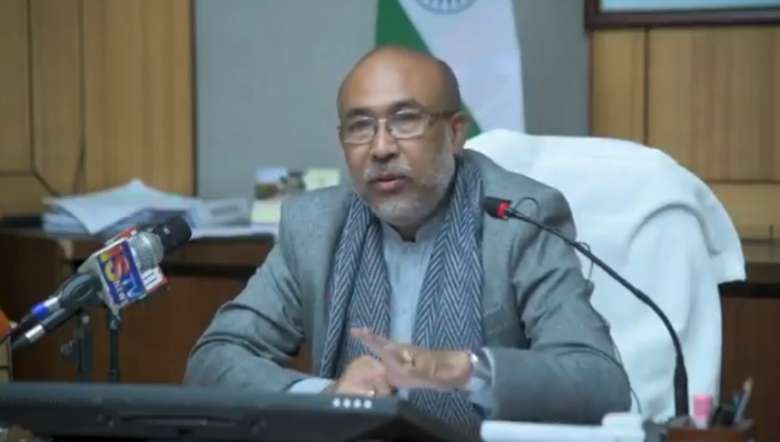 The Manipur government has projected to bore 550 irrigation wells under the Pradhan Mantri Krishi Sinchayee Yojana (PMKSY) with an objective to make the state become self-reliant in agricultural production, Chief Minister N Biren Singh said during the ongoing 12th session of the 11th Manipur Legislative Assembly on Friday.

The chief minister was replying to a query raised by MLA Th Lokeshwar Singh during the question hour session.

Biren said that the present government is targeting to become self-reliant in agricultural production. To meet the challenges posed by water scarcity caused by deforestation, the state government has projected to bore irrigation tube wells under PMKSY, he said.

The chief minister further said that under the said scheme, a total of 550 tube wells and dug wells will be bored at various places.

Of the total, 495 will be tube wells while the remaining 55 will be dug well, he said.

The chief minister said the boring of wells would be taken up after surveying the areas where groundwater is present through satellite mapping.

Each well will serve an area of around 2-3 hectares, he said, adding that the process of digging will begin after discussion and consent of the identified villages, he added.

Biren also clarified most of the wells would be operated with the support of solar energy in drawing groundwater. Under the PMKSY-HKKP (GM), the construction work of 50 tube wells have been executed, he added.

Responding to a query by MLA AK Mirabai regarding the reduction of sex ratio in the state with 757 females per thousand males as per report given by the Registrar General of India on November 19, 2020, the chief minister said that the given figure is not the worst scenario.

Pointing out that the people of the state do not usually follow the norms of registering birth certificates at child birth, he said that many newborn babies are left out in that report.

However, as per the state government reportbased on a health management information system in 2021, the sex ratio stands at 933 females child per thousand male child.

The state government is putting efforts to increase the figures by effective implementation of Pre-Conception and Pre-Natal Diagnostic Techniques Act, 1994.

To the question asked by MLA Surjakumar Okram regarding construction of Churachandpur Medical College, N Biren said that considering the insufficient number of doctors in the state, the government had approached for upgrading the district hospitals of Thoubal, Chandel and Churachandpur as medical colleges. But the government of India has given approval only for Churachandpur district, he added.

The Churachandpur Medical College would be constructed with a total cost of Rs 325 crore out of which, 90 percent would be state share, he added.

Surjakumar appealed to the leader of the house to try to upgrade Churachandpur medical college as a central institute.

When asked about the formation of an expert committee to examine post COVID-19 infection complications, the chief minister mentioned that the state government constituted the said committee consisting of six members.

MLA Ranjit Singh asked whether the state government has started implementing the government rules about discontinuation of the interview part in recruitment of junior level posts. CM answered that even in the state, the central government has instructed to implement the rules framed in 2017.

Biren said that the rules have been executed for recruitment of group C and D post since March 28, 2017. But they are yet to follow for group B post, he added.

Pointing out that the Rice Research Station in Wangbal had become dysfunctional, MLA K Ranjit Singh said that the construction of the said station started in 2013.

In a state like Manipur where rice is the staple food, effective implementation of the station is required at the earliest, he said. But due to the non-release of the state's share which amounts to Rs 248.707 lakh, it is unable to function till date even if most of the sections of construction have been completed. Besides, there is a shortage of junior scientists in the station, he added.

Replying to it, Biren said that the state government will try to finish the construction from the corpus funds as the amount was not earmarked in the recent budget. However, speeding up the process would be possible only when there are no legal complacencies, he added.