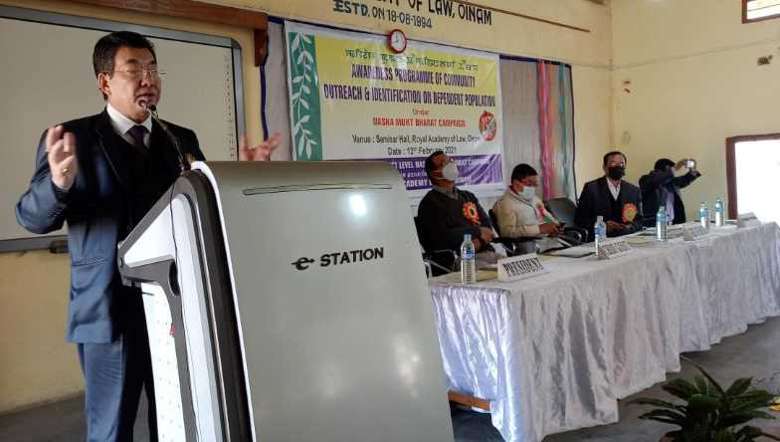 Awareness and community outreach programme at Oinam on February 12, 2021

Manipur has around 34,000 psychoactive substance dependent persons and it is a matter of serious concern for all, Dr RK Lenin Singh, head of the department of psychiatry, Regional Institute of Medical Sciences (RIMS) said at Oinam on Friday.

Dr Lenin was speaking at a programme on awareness and community outreach under the Nasha Mukt Bharat Campaign held at the Royal Academy of Law, Oinam, about 25 km from the state capital Imphal.

“Many youths become psychoactive substance-dependent when they opt for drugs as a means to address their emotional burnouts or negative peer pressure," Dr Lenin said.

Pointing out that Manipur has around 34,000 psychoactive substances dependent persons (drug addicted), Dr Lenin said treatment of drug users or drug issues in the state cannot be addressed without a multi-disciplinary approach and concerted efforts.

A resilient attitude is paramount while treating drug users as they need to undergo detoxification and repeated treatment to address chronic relapsing disorder, he added.

The campaign will cover 272 districts that are identified as “most affected” by drugs, Keisam Pradipkumar, chief functionary of Anouba Punsikon, Integrated Rehabilitation Centre (IRCA) said, addressing the event.

In Manipur, eight districts - Bishnupur, Imphal East and West, Senapati, Kangpokpi, Churachandpur, Ukhrul and Chandel - have been identified as most affected by drugs.

Meanwhile, Bishnupur district has been recognized among the best performing 10 districts in India in the implementation of the Nasha Mukt Bharat Campaign.