Making a mountain of a molehill

IFP Editorial: A revenue map attached with the government order nowhere indicates the inclusion of Haraothel within the boundary of the NSU site, but rather it is located beyond the NSU site. 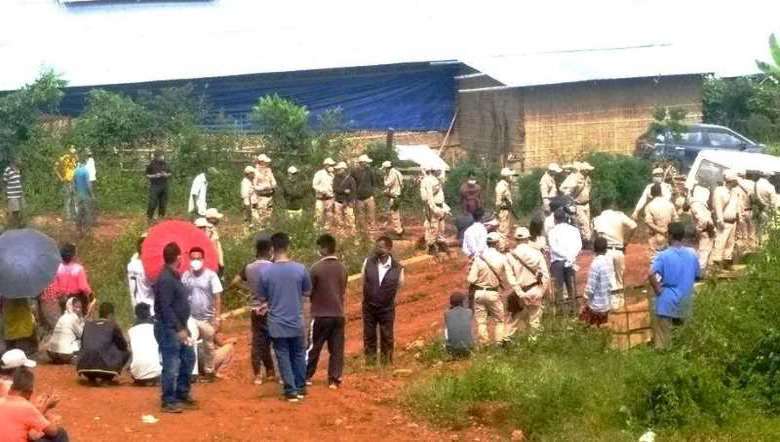 When Prime Minister Narendra Modi first announced the allocation of Rs 100 crores for establishment of a National Sports University in the 2014-15 Union Budget, there was widespread jubilation in Manipur. Modi’s unusual gift was in recognition of the prowess of Manipuri sportspersons who have repeatedly brought laurels and glory for the country. When the site selected by the then Congress government at Yaithibi Loukon became controversial with protests by the landowners and reports of land-grabbing by the powerful elite, the villagers of Senjam Khunou and Koutruk in Imphal West came to the rescue of the state government offering land ‘free of cost’ for the University in 2016. Backing the claim of a nearby village L Tangnaum village, Kuki Students Organisation warned the government against constructing the University at the proposed site, as the site belongs to L Tanguam under Saitu-Gamphazol Block of the Senapati district. However, by an order issued on December 28, 2016 the government allotted 140.28 acres from Koutruk and 185.82 acres from Senjam Khunou for the purpose of establishing National Sports University to the Director, Youth Affairs and Sports, Manipur. The said order also fixed a premium value of Rs 1,000 per acre amounting to Rs 3,25,900 to be paid to the state for the said land. A revenue map attached with the government order nowhere indicates the inclusion of Haraothel within the boundary of the NSU site, but rather it is located beyond the NSU site.

On March 16, 2018, Prime Minister Narendra Modi came to Imphal and fulfilled his pledge by laying the foundation stone for National Sports University at the site and the foundation plaque clearly mentions Imphal as the location. One must try to understand that a dignitary like the Prime Minister does not get himself unnecessarily involved in a dispute, be it of land or otherwise.

And it requires the approval of the Prime Minister’s Office (PMO) for every single word engraved on the foundation or inaugural plaques involving the prime minister himself, and the decision would have been arrived at after perusing the land records. It is simple logic and one needs to understand this. In fact, nobody came out to protest the laying of foundation stone then or in the immediate future also after the foundation stone was unveiled. Most of the Kuki ministers and MLAs were also present at Luwangsangbam, when the prime minister unveiled the foundation stone. Then, violence erupted last year when district authorities of Imphal West visited the site for land demarcation, and even bandh blockades were called. Then came the claim of Konsakhul, a Liangmei village as supported by the All Naga Students Union, Manipur (ANSAM). Konsakhul claims that the NSU site is within their traditional land which they had leased out to the Kukis in the past. While on the other hand, the villagers of Senjam Khunou, Senjam Chirang and Koutruk asserts that even the Haraothel area belongs to the three villages and that their forefathers had bought the land from the State Darbar by paying Rs. 13. According to Manipur State Darbar records in 1827, Haraothel is shown as the grazing ground for Senjam Chirang and Senjam Khunou villages.

Land and territory is a dear thing for individuals and groups, even in the animal kingdom. Everyone tries to zealously guard their land and territory. But, any claim has to be backed by proper land records and verifiable documents. The geo-political character of our state is based on ‘Ching-Pat-Turel’ and its inhabitants in both the hills and plains, and a lifestyle firmly rooted in interdependence. Just as the valley people respect the land rights of the people in the hills, the hill people also need to respect the land rights of the valley people, also. It would be considered unwise if the hill dwellers go on claiming every mound and molehill as their ancestral land. Since times immemorial, many villages in the valley had their own ‘Uyoks’ or forests reserves and grazing grounds in the nearby hills.