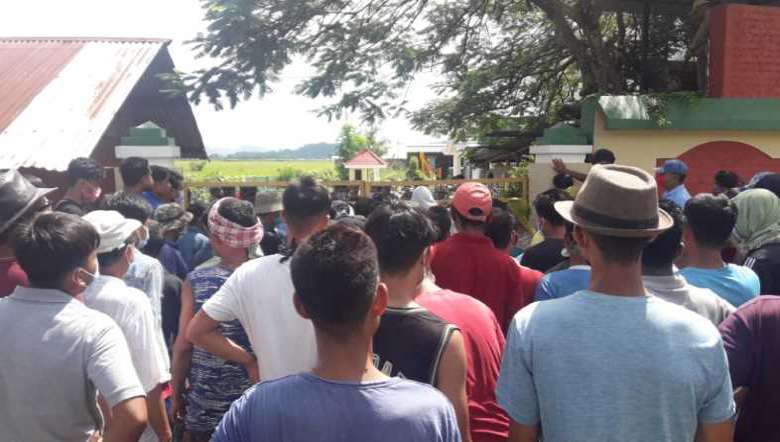 There seems to be no end to the National Sports University (NSU) land issue even after the Manipur government and the civil society in Kangpokpi agreed upon a resolution that ended the total bandh call along NH2 in Kangpokpi district. Decrying the move that stated the National Sports University (NSU) site at Haraothel as located in Kangpokpi district, locals of Haraothel stormed the residence of MLA, Sekmai assembly constituency H Dingo on Thursday.

After a ministerial-level talks chaired by youth affairs and sports minister Letpao Haokip to resolve the stir over the NSU land dispute on Wednesday, it was agreed to named NSU, Haraothel as NSU, Haraothel, Kangpokpi district since the land was donated by the chief of the said village.

However, in the evening, people living in and around Haraothel blocked the Imphal-Dimapur national highway 2 at Sekmai.

Denouncing the agreement which specified the area as under Kangpokpi district, locals of Haraothel and its surroundings who say that the area falls under Imphal West stormed the residence of Dingo around 9 am Thursday.

The protesters were blocked by the state police following which a confrontation broke out between the two. During the confrontation, protesters pelted stones at the residence of the MLA. Later, the MLA came out and met the protesters.

Considering the unprecedented breach of peace and tranquility in and around the National Sports University, district magistrate Kangpokpi has issued prohibitory order under 144 CrPC restricting movement of any person in the schedule area of Haraothel (L. Tangnaum) village.

The district magistrate Somorjit Salam has detailed sub divisional magistrate, Kangchup-Geljang T Opendro Singh for magisterial duty for maintenance of law and order in the area.

Meanwhile, the All Tribal Students' Union Manipur (ATSUM) has expressed strong condemnations over the retaliation by mob (supporting Senjam Chirang, Senjam Khunou and Koutruk) on Thursday following Wednesday’s agreement that was reached between the state government and KSO Sadar Hills over NSU.

On October 7, the state government and the Kuki students Organisation, Sadar Hills signed an agreement regarding the issue of the National Sports University, Haraothel.

“ATSUM strongly condemned the barbaric act of the mob (drunk) with machetes, knives and stick marching in thousands to Haraothel (L. Tangnuam) village,” it said, adding that had they not been stopped by Manipur Police under Kangpokpi District, the situation could turn volatile.

The tribal student body asserted that the action of the mob is ill-fated and lacks any reasonable cause and it is obvious that the step is an afterthought following Wednesday’s agreement reached between the state government and KSO Sadar Hills.

It further urged the government to take steps to enhance security for the surrounding villagers and speed up the process of resolving the issue of National Sports University so that peace and tranquillity prevail.

Meanwhile, KSO Twibul lhang has also condemned the alleged attack on innocent villagers of Leimakhong and Haraothel (L. Tangnaum) villages by people residing in and around Leimakhong and NSU site.

“On learning the destruction of Laipham we have enquired the matter and it seems the destruction was unintentionally done out of confrontation among the two communities and we strongly condemn the act,” the KSO clarified.

It further appealed not to repeat acts of brutality and barbarism, which was demonstrated on Thursday at Leimakhong and Haraothel (L. Tangnaum) villages in the future but to promote and maintain peace and tranquility in the area.