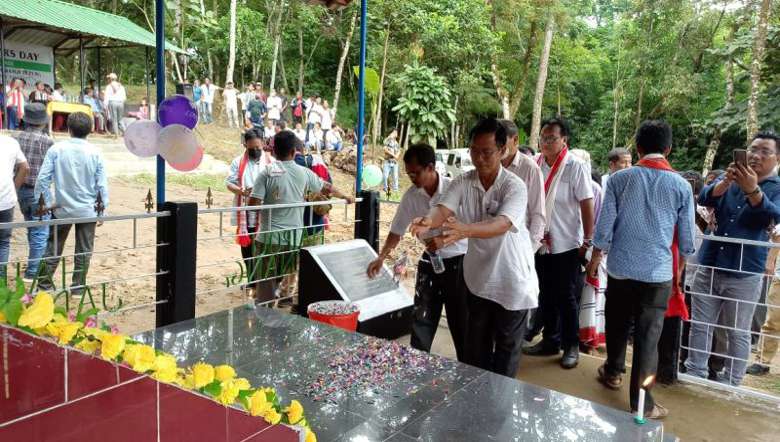 Haipou Jadonang was remembered on his 90th Martyr Day with several organisations observing it at different places in Tamenglong and Noney districts.

A silent prayer was held for the departed souls of Haipou Jadonang and former leaders of Zeliangrong.

Due to the pandemic, the death anniversary observation was toned down this year.

Zeliangrong Union (AMN) vice president and Zeliangrong youth front former president Namdinang Daimei spoke on the brief history of Haipou Jadonang. He said that the leader was born in 1905 at Kambiron Puiluan Village in Nungba sub-division of Tamenglong. Haipou Jadonang was hanged for his campaign against the British against no hill house tax, no force labour etc., he added.

At his birth place in Puiluan (Kambiron) village in Nungba Sub-division of Noney district, the observation programme was jointly organised by Puiluan Village Authority and Haipou Jadonang Memorial Trust committee. It was attended by Kakching deputy commissioner and also intending candidate in 54-Nungba Assembly seat Dinganglung Gangmei as chief guest.

Floral tributes were paid to the Naga freedom fighter Haipou Jadonang at his tomb.

In his chief guest speech, he said that the “Zeliangrong people must strive and work together for the well being and welfare of our people and society as our freedom fighter Haipou Jadonang did in his days.”  Colourful traditional dance and songs were the main highlights of the programme.

Speaking on the occasion, UNC president S Kho John said that Zeliangrong people are the most scattered among Naga brothers and lamented that there is disunity among the people.

It is high time for the people of Tamenglong, also like Ukhrul, Senapati or Chandel to become united in order to be assets to the Naga movement.

He also urged the joint tribe councils to reduce the internal feud and division among Zeliangrong brothers and strengthen the Naga movement and for the welfare of the younger generation.

In his address, Joint tribe council president Ramkung said that Haipou Jadonang resisted the Hill's house tax and forced labour against the British government by upholding that Nagas are free and no one should rule over them.

Haipou Jadonang also visualised a kingdom (Makam Gwangdi) of his people which was described by the British as the Naga Raj, he added.

Haipou Jadonang was arrested for the alleged proclamation of the Naga Raj. He was executed at Imphal on August 29, 1931. He was a social and religious reformer and political rebel, he added.