IFP Editorial: Perhaps, the time has come for changing the name of ‘Shaheed Minar’ in our local language as ‘Athoubasinggi Khubham’ also. 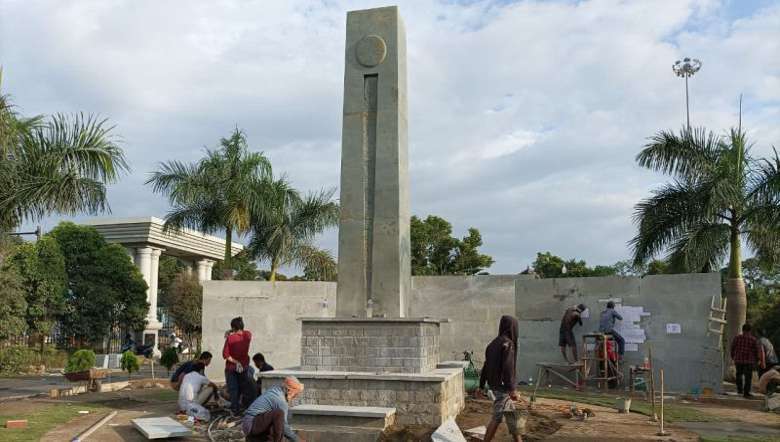 Memorial stone built alongside Shaheed Minar in Imphal in remembrance of Manipuri freedom fighters who were martyred during exile at Kala Paani (PHOTO: IFP)

Patriots Day 2021 observation is certainly going to be different from earlier years. August 13 is an important and unforgettable day in the history of the Manipuri nation as prominent figures who played a dominant role in the Anglo-Manipur War of 1891 against the British imperialists were hanged publicly at Pheidapung, which is now known as Bir Tikendrajit Park. Bir Tikendrajit, Thangal General, Pukhramba Kajao and Chirai Thangal were hanged before the very eyes of the general public while many unknown soldiers laid down their lives gracefully in order to save the nation from colonisation by the mighty British imperial forces.

So far, the state had been celebrating the life and sacrifice of these patriots and the unknown soldiers who gave their lives for the independence of Manipur. Perhaps unknown to many, the observation of Patriots Day was brought to the state level first by the Pan Manipuri Youth League in 1968 and taken over by the state government in 1972 when Md Alimuddin-led Manipur Peoples’ Party (MPP) after Manipur attained statehood.

While the ringleaders of the revolt against the British usurpers were hanged, some Manipuris including Maharaj Kulachandra were exiled beyond the ocean at Kalapani, which is the infamous Cellular Jail located at Andaman and Nicobar Islands.

It has been reported that the first batch includes 15 Anglo-Manipur War Heroes (AMWHs), including Maharaja Kulachandra Singh followed by transportation of the remaining war heroes. Besides the list from the Manipur State Archives (MSA), another deported war hero named, Abungjao Yengkhoiba, was also reflected in the colonial proceedings of the Anglo-Manipur War of 1891 as well as in the list of the first batch of AMWHs deported to Kalapani, but could not be traced in the later correspondence for release from Kalapani.

In addition to the AMWHs, a Manipur Prince 'Sana Chahi Ahum' alias Prince Narendrajit alias Prince Ranjit, son of Maharaja Chourjit Singh of Manipur (1803-13) was also transported to Kalapani in the year 1858 for leading the Sepoy Mutiny popularly known as the First War of Indian Independence at Cachar, Barak Valley of Assam. It was mentioned in the report of Captain Stewart who himself as the Superintendent of Cachar, was actively involved in containing the mutiny led by Prince Narendrajit.

The people of Manipur were more or less reasonably disappointed that the Manipur War Heroes were obliviously not in the list of freedom fighters imprisoned at the Cellular Jail. The data is based on that wall inscription of the jail, and is divided into three phase – the First Phase (1909-1921), Second Phase (1922-1931), and Third Phase (1932-1938).

This year, the state government under the leadership of Chief Minister N Biren Singh has undertaken the responsibility of celebrating those jailed at Kalapani for revolting against the British imperialists, besides those who were publicly hanged at Pheidapung.

A new memorial in memory of the forgotten martyrs who were interned at Kalapani besides the ‘Shaheed Minar’ has been constructed and is to be formally inaugurated on Friday.

Perhaps, the time has come for changing the name of ‘Shaheed Minar’ in the local language as ‘Athoubasinggi Khubham’.

Also Read: Manipur Patriots Day 2021: ‘Let us all take a pledge to stand as one and work together for development of state'