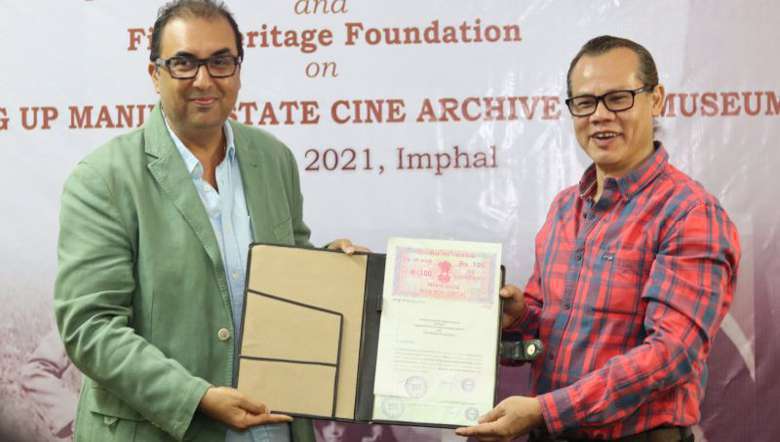 Manipuri cinema achieved a major milestone on Saturday as the Manipur State Film Development Society (MSFDS) and the Film Heritage Foundation (FHF) inked a memorandum of understanding (MoU) to work together in preserving Manipur’s film heritage. The MoU was signed on the second day of the inaugural programme of the yearlong celebration of 50 years of Manipuri cinema.

The MoU was signed by MSFDS secretary Sunzu Bachaspatimayum and founder director of Film Heritage Foundation Shivendra Singh Dungarpur along with two witnesses each.

“Manipur is the only state in Northeast India that has taken such a major initiative for film preservation,” Shivendra of the Film Heritage Foundation said.

In 2015, the executive board meeting of MSFDS decided to set up a film archive for Manipuri cinema but no follow up action was taken until recently.

Shivendra observed that it must be the first time in India as well that an archive and museum with training facilities for preservation and archiving has been opened.

The SN Chand Cine Archive and Museum at the MSFDS was inaugurated on Friday as a part of the opening programme of the yearlong celebration.

As agreed by the two parties, he said that the foundation will extend technical support and share expertise to help MSFDS run a fully functional film archive and museum, which can house the state’s cinematic heritage.

The foundation will also help in setting up a preservation policy for MSFDS, digitising and restoring the films. “We have already donated two rewinding tables to the society where the celluloid films can be rewinded for regular cleaning and maintenance,” Shivendra added.

Film Heritage Foundation is a non-profit organisation, established in 2014 and based in Mumbai working for the preservation and restoration of film heritage across India.

The founder director said, “Film is an art and just like any other art forms like music, dance, painting, films need to be preserved as they are the reflection of history, the society and who we are… It is one medium which reflects time”.

Shivendra further said that the MoU will be for two years and extendable. Nevertheless, the mandate of the foundation is to help organisations like MSFDS preserve the film heritage, he said.

The idea is not just to recover the things of the past but to preserve for the future as accessibility is equally important, he added.

Following the signing of the MoU, a three-day workshop on film archiving began.

A major workshop on film preservation and archiving will be organised in November with international experts, Shivendra said.

Further stressing on the need for preservation, Shivendra said that India is losing its films at such a fast pace. Going by statistics, 70-80 per cent of films were lost by 1960 and 99 per cent of the silent films have been lost.

“We lost so much film heritage because nobody bothered about them. One main reason is that people think of films as just entertainment and not as an art form,” he lamented.
For Manipur, the participants in the ongoing workshop are very enthusiastic, he said.

“We have set the target to clean and repair the old reels and create the ideal vault before monsoon as the increase in moisture may worsen the condition of the films,” he added.

Pointing out that the MSFDS needs the support of the government in making the archive and museum fully operational, he urged the state government to take initiatives for bringing back the negative prints of Manipuri films being kept in Kolkata with the shutting down of film labs.

Meanwhile, MSFDS secretary Sunzu Bachaspatimayum expressed confidence that the archive and museum will be fully operational in the near future and will go a long way in preserving the state’s cinematic heritage for posterity.

Meanwhile, the need to streamline the varied phases of Manipur’s film history was deliberated during the Cine Dialogue held on the second day of the inaugural programme of 50 years of Manipuri cinema on Saturday.

The dialogue was on ‘Journey of Manipuri Cinema’.

Following a heated discussion on the beginning of digital cinema in Manipur, film activist Salam Rajesh who moderated the Cine Dialogue put forward the need to streamline the history with proper documentation.

Film critic Meghachandra Kongbam and filmmaker Makhonmani Mongsaba were the panelists of the session. Makhonmani Mongsaba said that Manipuri cinema did not grow as a lone entity but rather evolved with roots in traditional courtyard plays and theatres.

Although there were films prior to ‘Matamgi Manipur’, the film is considered as the first Manipuri feature film as it was the first to receive censor certificate for public exhibition.

Nevertheless, the roles of pioneers like MK Priyabrata, K Ibohal Sharma, SN Chand among others should be remembered, he said, stressing the need for filmmakers to be closely associated with literature and other art forms.

Saying that even ‘Matamgi Manipur’ was adapted from Arambam Somorendra’s play ‘Tirtha Jatra’, he opined that films distancing from literature is not a good sign.

Makhonmani also said that there is a pressing need for film enthusiasts to make sure that the link between each generation of film personalities is not broken.

Meanwhile, Meghachadra Kongbam recounted that the film movement in Manipur gained momentum with the setting up of Film Society Manipur in 1966. In 1971, MA Singh became the first FTII passed out Manipuri. SN Chand tried his hands on ‘Brojendrogee Luhongba’, which is the first Manipuri feature film directed by a Manipuri, he said.

He maintained that even though the shooting of ‘Brojendrogee Luhongba’ was prior to ‘Matamgi Manipur’, the later completed first as most of its scenes were shot inside the studio while the former took a little more time.

Nevertheless, ‘Matamgi Manipur’ winning a national award is a matter of pride and within 10 years, Imagi Ningthem won the Grand Prix in 1982 at the Nantes International Film Festival, he added.

Later in the day, ‘Cheng Khujok Ama’ by Meneka Thiyam, ‘Orphanage to Olympics’ by Bobby Wahengbam were screened.

In the North East Focus section, ‘On Aroll’ by Sanjib Das (Tripura), ‘Ishanou’ by Aribam Syam Sharma and ‘Bulbul Can Sing’ by Rima Das (Assam) were screened followed by an interaction session with filmmaker Sonia Nepram.

He came, he saw and he left