The rally was organised by the Joint Tribes’ Council demanding the authorities to defuse the prevailing tensions in the district created by heavy deployment of security forces in Tamenglong headquarters. 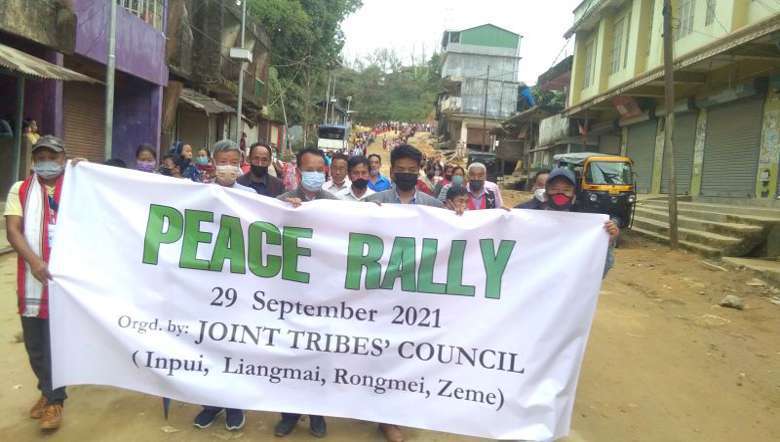 The Joint Tribes’ Council of Zeme, Liangmai, Rongmei and Inpui on Wednesday organised a ‘peace rally’ demanding the authorities to defuse the prevailing tensions in the district created by heavy deployment of security forces in Tamenglong headquarters.

The rally with banners was taken out from Haipou Jadonang Park to Apollo bazaar. All shops and markets were closed and vehicle movement was halted during the peace rally.

After the rally, the Joint tribes’ Council submitted a memorandum to Chief Minister N Biren Singh through the deputy commissioner Tamenglong, demanding to defuse tensions created by heavy deployment of security forces in Tamenglong.

The council supports the investigation into the matter; however, the public cannot be victimised, stated the memorandum signed by Joint tribes’ Council convener Ramkung Pame and secretary Aku Newme.

It may be mentioned that heavy security forces have been deployed after Zeliangrong Baudi former president Athuan Abonmai was murdered in the district.

Before starting the peace rally, council secretary Aku spoke about the formation of the Joint Tribes’ Council.

He also expressed the need to remain united among the people at these crucial and testing times.

Ramkung urged the people of Zeliangrong brothers to stay vigilant and be clear headed. He said, now is not the time to be confused and urged them to know who represents and speaks for them.

The Joint Tribes' Council is an apex body and the council works for the welfare of people. However, taking advantage of the murder of Athuan Abonmai, some people have attempted to break the brotherhood of Zeme, Liangmai, Rongmei and Inpui tribes, he said.

He also informed that the Joint Tribes’ Council women wing ‘Rongmei Lu phuam’ adhoc committee has been made for the time being.

He further urged the people of Tamenglong to dispel the confusion about the joint tribes’ council and clarified that the council is for the people and represents the Zeme, Rongmei, Liangmai, and Inpui.

Forum for Naga reconciliation member reverend Kaiba prayed for peace and harmony in the district. He also prayed for district administration, police and leaders of civil organisations.