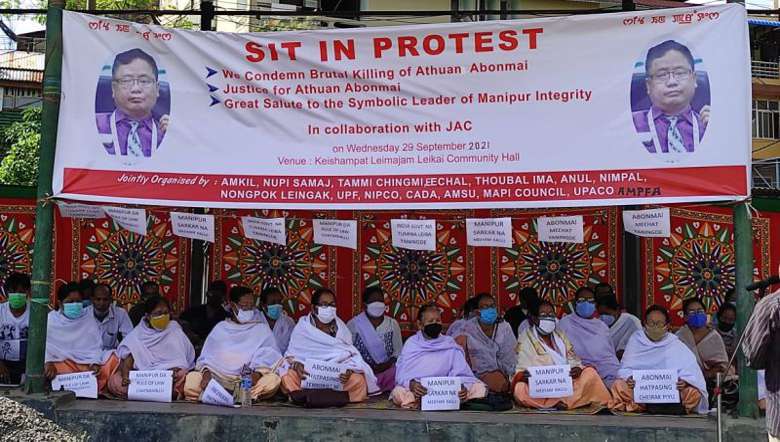 Amid the strong demand for justice and condemnations by several organisations and communities against the brutal murder of Athuan Abonmai, former president of Zeliangrong Baudi (AMN), Meira Paibis are now demanding unconditional release of one of the arrested suspects Lanchapou Bosco Gonmei, stating that the real culprits should be arrested.

Meira Paibis of Langol Laimanai held a sit-in protest against the arrest of Lanchapou Bosco Gonmei of Langol Laimanai allegedly on mere suspicion of involvement in the murder of Athuan Abonmai which took place in Tamenglong district on September 22.

Samom Ongbi Premala, a meira paibi of Langol Laimanai said that Bosco was not the person who killed Athuan Abonmai. The police are playing a dirty role in making the people remain silent on the case, she alleged.

Bosco was picked up from his home at Langol Laimanai and it was witnessed by many people of Langol.

“Bosco should be released without any conditions or else strong agitations will be launched,” she said.

“Arrest the real culprits, not dummies. Do not play games to fool the people,” the protesters stated.

During the protest, AMKIL president Lourembam Nganbi warned both the Central and state government of unwanted consequences unless justice is delivered and raised suspicions of an alleged conspiracy by those in power in collusion with NSCN (I-M) concerning the murder.

If governments intend to kill those who talk and stand for a united Manipur and those who spread the message of all Manipuris as one, then the mothers of Manipur will come forward, Nganbi said.

“They can kill us first. As mothers, we are ready to die protecting every Manipuri from each community who speaks for peace, development and integrity of the state,” she said.

The government is trying to divert the issue by arresting some suspects from Imphal area when the incident actually happened amid state and central security forces in Tamenglong, Nganbi said.

She also questioned why the Indian Army and the state security forces are not conducting combing operations at the camps of NSCN (I-M), which they already know.