Hoisting of black flags at every household, praying at Church for the cause of victims' families, closing of every business establishment within the jurisdiction of Chingdai area marked the occasion. 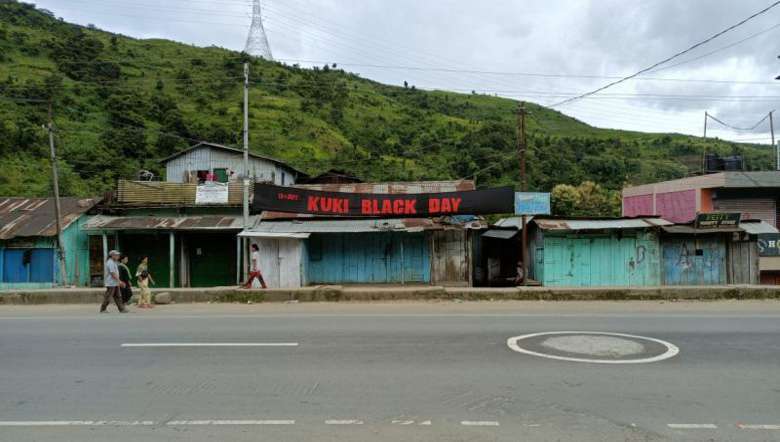 Kangpokpi town was donned with black colour as black flags were seen hoisted up in all bazar areas and along the National Highway 2, and every residential houses of the town while Kukis were seen wearing black cloths observing the Sahnit Ni, the Kuki's Black Day on Monday.

As instructed by the Kangpokpi Town Committee following the direction and guidelines of the Kuki Inpi Manipur, the day was observed as a 'Mass Prayer Day' for the Kukis that was conducted from 11:00 am till 1:00 pm in compliance with COVID-19 SOPs.

There was a strict restriction on any individual or persons moving out of home or travelling outside except for participation in the Black Day programme while working in farms or fields has also been strictly restricted.

Everyone was seen donned with black cloth and black flags were also seen hoisted on the roof of all the Kuki houses apart from in all bazar areas and alongside the National Highway 2 in Kangpokpi town.

All shops and business establishments were seen closed for the day and movement of vehicles were also seen less while vehicles coming out on the road were mostly seen with a black flag.

Two giant banners written ‘Kuki Black Day’ in red colour were put up alongside the road at IT Road and Kangpokpi main bazar under the aegis of Kangpokpi Town Committee, Kangpokpi Women Welfare Organisation and Kangpokpi Youth Union.

A candlelit service led by KTC, KWWO, and KYU was also held in the afternoon at around 6:00 pm to pay tribute to the departed souls at Rotary Club Waiting Shed near Brig. M. Thomas Ground, Kangpokpi.

Many victims’ families also participated in the candlelit service apart from various civil body leaders and the general public with strict COVID-19 protocols.

Sahnit Ni, the Kuki's Black Day was also widely observed in all Kuki-dominated areas in Kangpokpi district with similar observance.

Pamphlets which read, ‘Respect innocent lives’, ‘Your lost-our lost’, ‘lest we forget’, ‘we forgive but won't forget’, ‘book the culprit’, ‘we are with you-the bereaved’, were displayed.

Hoisting of black flags at every household, praying at Church for the cause of victims' families, closing of every business establishment within the jurisdiction of Chingdai area marked the occasion.

Meanwhile the day was also observed at KIC complex Tuibong Churachandpur today with the theme ‘lest we forget, seeking for justice and the way forward'. The event was attended by various sister organiSationS of the Kukis like KSO Churachandpur, Kuki women’s organisation for human rights, Kuki Khanglai Lompi and Kuki Inpi Churachandpur.

The day was observed to remember the kukis who died allegedly at the hands of NSCN (I-M) which killed more than 108 kukis from three villages on September 13, 1993.

At a brief function at KIC complex, condolence and prayers were offered by reverend Thangzakap Chongloi. The black day message was given by vice president (Dev.) of KIC Lalrobul Pudaite who said that this is Kukis' history and must never be forgotten.