Kuki Inpi Manipur (KIM) Hemzangthang Khongsai said that from 1992 to 1997, around 1,000 innocent Kukis, including women and children were killed and 300 Kuki villages were uprooted by the NSCN (I-M). 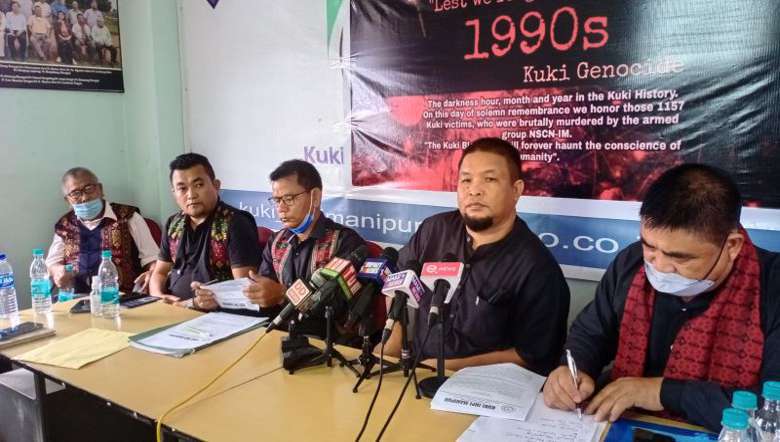 Remembering the alleged massacre of Kuki tribes including children during the infamous Kuki “genocide” of 1992-1997 by the armed cadres of the NSCN (I-M), the Kuki tribes on Monday observed 28th Sahnit-Ni (Kuki Black Day) in Manipur.

During the Joupi Massacre of September 13, 1993, as many as 108 innocent Kuki villagers, including women and children were allegedly killed by the armed cadres of the NSCN (I-M) in different places of Tamenglong and the erstwhile Senapati district, said vice-president of Kuki Inpi Manipur (KIM) Hemzangthang Khongsai while speaking to the media at the office of KIM in Imphal.

He said that from 1992 to 1997, around 1,000 innocent Kukis, including women and children were killed and 300 Kuki villages were uprooted by the NSCN (I-M), turning over 1 lakh villagers to become refugees in their own land.

Today marks 28 years since the Joupi massacre, and the Kuki tribe has been observing the Kuki Black Day in remembrance of the victims killed during the ethnic clash starting from 1992 to 1997, he added.

“September 13 is the bloodiest and darkest date in the history of the Kuki tribe. It is the day, the Kuki around the globe pause to remember and reflect on the horrors of the mass killing of Kuki tribes by the NSCN (I-M),” the vice-president said.

Unfortunately, due to the apathy of the state and the Central government, justice still remains elusive till date for all the victims of the ethnic cleansing campaign whose only crime was that they were Kukis, said Hemzangthang.

Calling for delivery of justice from the government for the innocent souls, he said, “we will continue our fight against injustice and oppression with a renewed fervour and resolve, and we will continue to do so with a religious fervour until justice is duly served to the victims of the Kuki Genocide.”

Though the observation has not been held unlike past with public function due to the Covid pandemic, all the Kuki Villages in Manipur observed the day with mass prayer, he mentioned.