Irani made a whirlwind tour of Bishnupur DC complex and attended several programmes as a commemoration of Rashtriya Poshan Maah in Manipur. 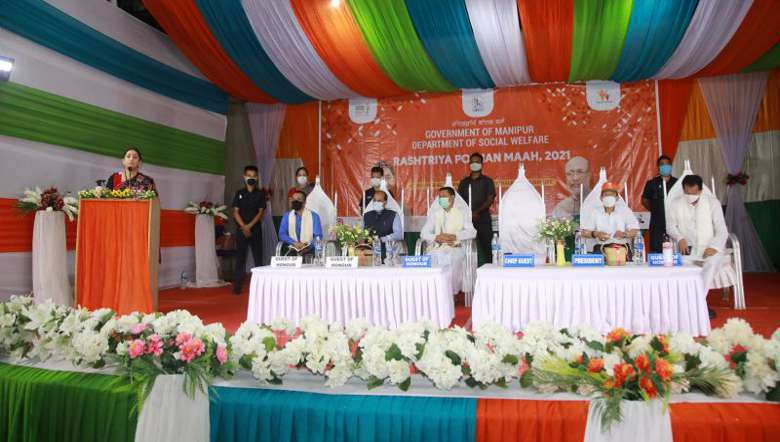 At Bishnupur DC Complex, she participated in a cycle rally organised as a commemoration of Rashtriya Poshan Maah which is a flagship programme of the Women and Child Development Ministry.

To the surprise of officials present in Bishnupur, Smriti Irani rode a bicycle along with hundreds of Anganwadi workers. She also took part in a tree plantation programme along with Rajya Sabha MP Leishemba Sanajaoba and district officials.

The union WCD minister also inaugurated an anaemia camp at the Bishnupur DC complex and interacted with doctors and health workers.

While addressing the gathering at Bishnupur district, Smriti Irani expressed her gratitude to the Anganwadi workers for going door-to-door in distributing supplementary nutrition to pregnant women, lactating women and children.

Smriti Irani said with the demographic size of the country, India can be a leader in many fields and therefore, the nation cannot afford to have malnourished women and children.

She also stressed that with programmes like Poshan which are being introduced in partnership with the Central government, the state government and the people of Manipur Anganwadi workers can be a part of nation building.

The union WCD minister further said children who are malnourished will earn 20 per cent less than children who are healthy when they become a part of the labour force of the country. She said nutrition is a concern not only for mothers or doctors but it is a concern for the economy and community as a whole.

On her whirlwind tour of Manipur, she made it a point to reach the Indian National Army (INA) Museum situated at Moirang where she paid her homage.

INA Museum in Moirang is a historical place where Nataji Subhash Chandra Bose hoisted the flag of the INA during the 2nd world war.

At the complex, she interacted with Anganwadi workers and listened to their queries.

Responding to a query made by an Anganwadi concerning the honorarium payment given to them, she replied that the nature of works of Aganwadi workers is honorary and to maintain its basic nature the honorarium could not be increased. However, she said she will make sure that officials in Manipur provide smartphones to Anganwadi workers.

Irani also elaborated the importance of the spirit of Netaji Subhash Chandra Bose in nation building. Later, she flagged off a rally for Rashtria Poshan Maah.