The protest which began at the village ground culminated at the site where the two deceased bodies were found dumped near Ihang river banks. 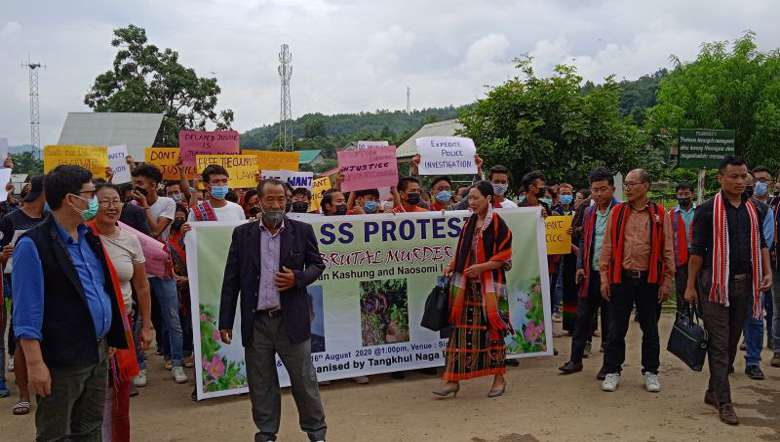 Showing strong dissatisfaction over the reported delay in delivering justices to two Sinakeithei villagers who were allegedly killed, a protest rally was held at Sinakeithei village on Monday by joint civil bodies while a 48-hour ultimatum was also served to the state government to arrest the culprits.

The rally was held under the aegis of the Tangkhul Naga Long led joint civil bodies of the district and 18 Sagolmang village authorities.

On August 4, one Thotreichan Kashung, 31, son of Mothang Kashung and Naosomi Lungleng, 29, son of Lt Lightson Lungleng of Sinakeithei village in West of Ukhrul district under 44-Ukhrul assembly constituency went missing. Their highly decomposed bodies were later found near the village gate in Ithang river banks at around 3 pm on August 8. Both were residents of Sinakeithei village in the West of Ukhrul district.

The protest which began at the village ground culminated at the site where the two deceased bodies were found dumped near Ihang river banks.

TNL president Hoping A Shimray on reaching the site, invoked the Tangkhul traditional way of making the departed souls to rest in peace.

He said that justice delayed is justice denied and urged the state government to do the needful.

Hopingson while joining the grieving families appealed to the people to let rule of law and fair judicial system play their due roles. “The Tangkhul frontal bodies and the 18 Sagolmang village leaders have come together to ensure that justice is delivered and continue to fight till it is delivered,” he added.

Other frontal leaders who spoke on the occasion have also shared their solidarity with the two grieving families and have resolved to stand for impartial and fair justice.

For any untoward incident after the deadline, the state government will be solely held accountable, they resolved.

A joint statement issued by the Tangkhul civl bodies maintained that they would not collect the bodies until the culprits have been arrested.