Several illegal stone crushing units are being set up along the stretch of road between Moidangpok to New Keithelmanbi areas in violation of Location of Factories Rule, 2013. 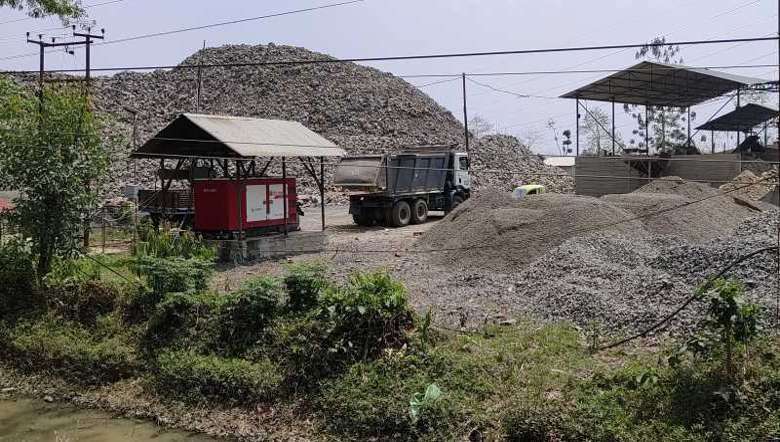 A stone crushing unit along the road between Moidangpok to New Keithelmanbi areas (PHOTO: IFP Image)

Increase in illegal stone crushing units along the stretch of road between Moidangpok to New Keithelmanbi areas is posing unbearable air and noise pollution among other problems to the people living in nearby places.

According to the Location of Factories Rule, 2013, no stone crushing factory is allowed to install its stone crushing machine and operate within the limit of 300 metres on national highways or state highways, and 100 metres of link roads and other district roads boundary. It should be located 300 metres away from residential areas, educational institutions, historical places, religious places, zoological parks, wildlife sanctuaries and hospital.

Most of the stone crushing units are set up in paddy land, by the roadside and some within 300 m of highways and residential areas.

In view of the rise in setting up of illegal stone crushing units, the Directorate of Trade, Commerce and Industry inspected eight stone crushing units set up at Moidangpok and Keithelmanbi areas on Monday (April 12, 2021) and resolved to issue show-cause notice to them for violating the norms of setting up such units.

The department took the initiative of inspection after the Joint Action Committee (JAC) against polluting factories and industries in and around Moidangpok, New Keithelmanbi and Moidangpok Khunou made an appeal to the authority concerned to shut down the said units through reports published in local media on April 10.

On the sidelines of their inspection carried out in association with the JAC, officer-in-charge, Internal Task Force, department of Trade, Commerce and Industry, Thongam Phulchand Singh told mediapersons that eight stone crushing units set up between Moidangpok to Keithelmanbi areas totally violate the Act. Moreover, the units failed to produce documents required in opening of such units.

As such, the Directorate of Trade, Commerce and Industry will take legal action against those units, Singh said.

JAC president Thokchom Amumacha Meitei said unloading of boulders which is considered as raw material for stone crushing units every day, particularly during midnight creates heavy air and noise pollution. The nearby areas remain dusty throughout the day.

“Just by seeing the large amount of boulder piled up just like a hillock in some of the stone crushing units, one can assume how much the people living in nearby places would be affected. It is high time for the related department to enquire from where all these boulders are quarried,” he added.

Meitei further said that farming is the primary source of income for people living in the said areas. But with the growing number of stone crushing units being set up, farmers in the affected areas could not carry out their agricultural activities unlike before. The pollution has become unbearable. The units also hamper commuting to the farm site due to construction of fencing for the units.

One of the private schools called “Sunshine Academy” at Moidangpok is likely to close down because of one stone crushing unit set up adjacent to it, he added.

“The villagers are running from pillar to post, seeking government intervention to address the problems of disturbance created by said stone crushing units. However not a single response was received which has prompted the publishing of their grievances in local media,” he said, urging the authority concerned to take up appropriate action against all illegal stone crushing units in the state.