Secretary of the said JAC S Tombi Devi said that due to air pollution, the locals have started facing health hazards while the crop production is being reduced. 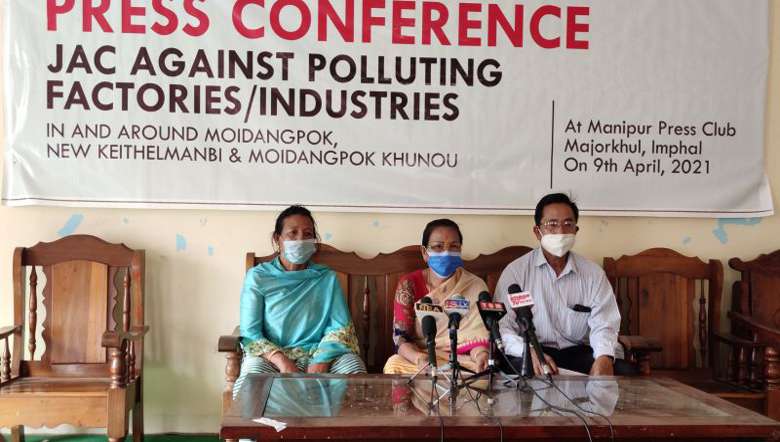 The ‘JAC against polluting factories/industries in and around Moidangpok, New Keithelmanbi and Moidangpok Khunou’ has demanded the state government to shut down all the stone crushing units, brick fields and industrial units set up in their areas.

Democratic form of agitations will be taken up if the state government fails to materialise their demand at earliest, said secretary of the said JAC S Tombi Devi in a press conference held at Manipur Press Club on Friday.

Tombi said that with the setting up of stone crushing units, brick fields and industrial units unchecked in and around Moidangpok, New Keithelmanbi and Moidangpok Khunou areas, the people residing nearby are facing numerous problems starting from health hazards to economic impacts.

She further said that units and industries were set up in paddy land in the last four- five years back. It is a complete violation of Manipur Conservation of Paddy Land and Wetland Act 2014. On top of this, the necessary raw materials for the stone crushing units are also quarried from reserved forest areas, she added.

Tombi said that locals can no longer tolerate the effects of these industries. They have been urging authorities concerned such as DC Imphal West, SDO Patsoi, Manipur Pollution Control Board, department of Trade, Commerce and Industries to stop functioning of these industries and units, she said.

Appeals were made in June, 2020 but not a single step has been taken up yet, she stated. It is unfortunate that despite the approaches made by the locals last year to control the setting up of industries, two more Bitumen Mixture plants and brick fields are under process to be set up soon.

“Due to air pollution, the locals have started facing health hazards while the crop production is being reduced. It is high time the government draws attention in this regard to ease the sufferings of the poor villagers,” she added.