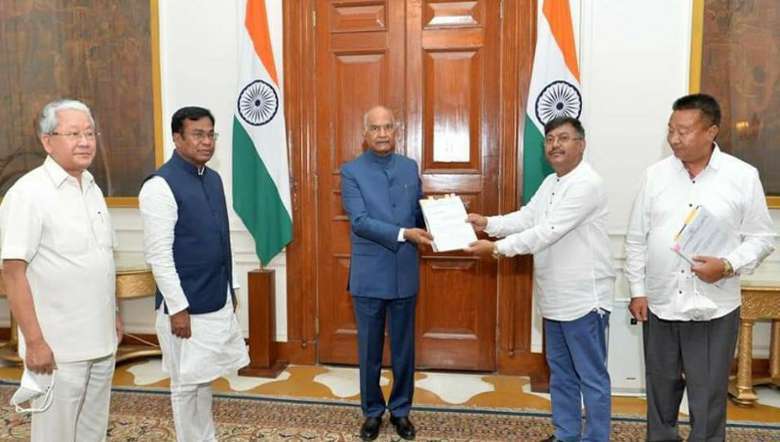 The Manipur Pradesh Congress Committee (MPCC) has petitioned the President of India to either recall or ensure that the governor of Manipur performs or discharge constitutional duties and obligations as envisaged under the Article 192 of the Indian Constitution.

In this regard, a team of MPCC led by its president K Govindas, former chief minister O Ibobi and CWC member Gaikhangam met President Ram Nath Kovind on Wednesday at Rashtrapati Bhawan, New Delhi and submitted a memorandum.

The memorandum mentioned that Governor Najma Heptulla in several past incidents had failed to discharge her constitutional duties and obligations by completely ignoring the law which has been laid down by the Supreme Court as well as established democratic and parliamentary practices. 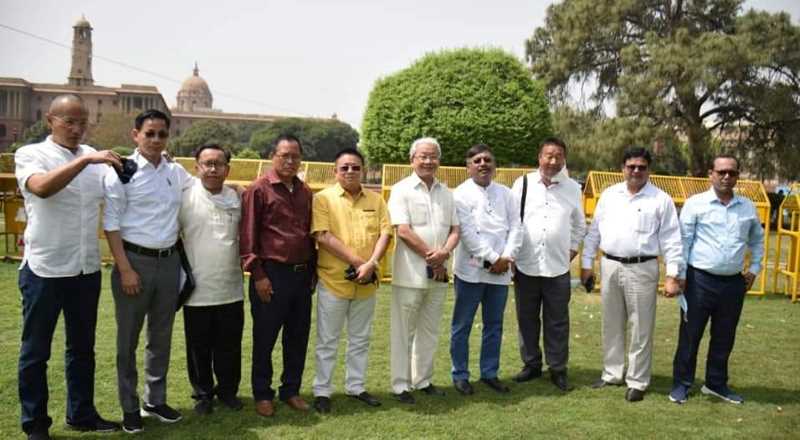 It pointed out that in the 2017 state Assembly election, the Congress party emerged as the single largest party with 28 elected members.

The memorandum stated that the largest single party ought to have been invited to form the government according to the law laid down by the Supreme Court in umpteen numbers of cases and established parliamentary practices followed invariably in all the states of the country.

However, in the case of Manipur, the BJP which had the strength of 21 members was allowed to form the government with the help of smaller parties, none of which had any pre-poll alliance before the election, it added.

The memorandum also highlighted that Th Shyamkumar Singh who was an MLA elected on a Congress ticket, without resignation from the party, was sworn in as a minister by the governor and accordingly, he was inducted as a minister in the BJP-led government.

Change of political loyalty followed by induction as a minister in the ministry led by a rival party, incurred disqualifications as contemplated in the 10th Schedule to the Indian Constitution, it stated.

The above two incidents shows how constitutional provisions and established democratic and parliamentary practices have been flouted with impunity, the memorandum stated. Although these two instances could not be undone now, there are many more in the cupboard, it added.

It further stated that 12 MLAs belonging to different political parties supporting the BJP-led government in Manipur were appointed as Parliamentary secretaries by Chief Minister N Biren in exercise of the power conferred upon him under Manipur Parliamentary Secretary (Appointment Salary and Allowance and Miscellaneous Provisions) Act, 2012 and such appointees were given not only the status of a minister but also enjoyed financial benefits as well as other perks entitled to a minister.

The memorandum mentioned that after realising the legal lacuna in such appointments, a repealing Act under the name Manipur Parliamentary Secretary (Appointment, Salary and Allowance and Miscellaneous Provisions) Act, 2018 (in short, Repealing Act of 2018) was passed by the State Assembly.

After several petitions were filed, challenging the Act, both the Act 2012 and Repealing Act of 2018 were declared as unconstitutional for want of legislative competence by the High Court of Manipur in several writ petitions and PILs, it added.

The memorandum further stated that Congress MLA DD Thaisii, relying on the aforesaid order of the High Court submitted an application dated October 21, 2020 before the governor to initiate a proceeding and obtain the opinion of the Election Commission of India (ECI) as contemplated in Article 192 of the Constitution of India before taking any decision.

It said that the governor was pleased to forward the said application to the ECI for obtaining an opinion vide forwarding letter dated October 29, 2020.

Asserting that the Congress MLAs have been informed through reliable sources that the ECI had already tendered their valuable opinion to the governor in January, it stated that despite the lapse of two months' time, the governor has not taken any decision till date nor was any reason given for not taking the required decision in terms of Article 192 of the Indian Constitution.

Meanwhile, the term of the present Manipur Legislative Assembly will end in 11 months, it added.

“The governor of the state, being the constitutional head of the state government, is expected in her conduct and action to conform to the provisions of the Constitution of India and established democratic and parliamentary practices,” the memorandum mentioned.

Stating that the Congress MLAs will always crave for trust and confidence in the conduct and action of the governor, it stated, “However we are being denied such privilege due to several controversial conducts and actions of the governor.”

Having no other option to ventilate their legitimate grievances, the Congress MLAs may be allowed to take liberty to approach the President of India, as the executive head of the Indian Union and also being the appointing authority of the Governor, it added.