Can the government’s 'war on drugs' help save lives of young drug users in Manipur?

Manipur has as many as 24,000 children-cum-adolescent population using various forms of drugs, according to Keisham Pradip, a former member of the Manipur Commission for Protection of Child Rights (MCPCR). 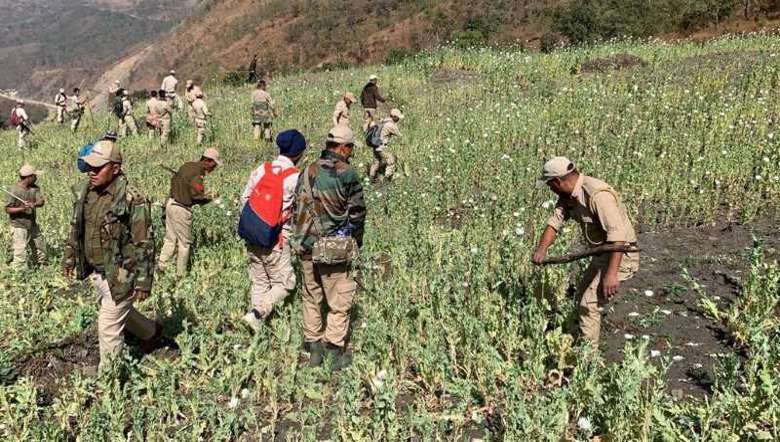 Poppy plantation being destroyed in Manipur as a part of the government's war on drugs (File photo: IFP)

Thousands of parents in Manipur have been fighting a losing battle against the menace of drugs and alcohol as many of their young children are sucked into and drowning in the bitter pool of drugs and other substance abuse. In view of the increasing number of drug abusers and drug trafficking in the state, the state government has been blowing the rhetoric of war on drugs. But can the present state government’s widespread drive against abusive substances titled ‘War on Drugs’ and Nisha Thadoklasi or the Central government campaign - Nisha Mukt Bharat - save the lives of thousands of dying young population in the state? Can it reach out to the thousands wounded mothers and save the state’s future?

In recent years in Manipur and other parts of the country, apart from alcohol, drug abuse or substance use among youth and adolescents has emerged as a major social problem with serious health impacts not only on children and adolescents but also other family members. Understanding the reason for the increasing number of drug users is important for developing prevention programme and policy. However, lack of survey and data on drug users in the state make prevention intervention difficult. The available data from various studies conducted by other states, however, suggest that a huge number of children under the age of 14-15 years are using psychoactive substances. Many youths turn to psychoactive substance to address their emotional burnouts or negative peer pressure, according to experts.

In the case of Manipur, there are as many as 24,000 children-cum-adolescent population using various forms of drugs (73 per cent of 34,000 psychoactive substance-dependent population of Manipur), said Keisham Pradip, a former member of the Manipur Commission for Protection of Child Rights (MCPCR), while delivering his speech on issues of children with psychoactive substance in Manipur at a state-level workshop.

Among the users, tobacco (46 per cent) is most commonly used, followed by alcohol (29 per cent), cannabis (14 per cent) and opiates (12 per cent). On multivariate analysis, substance abuse was significantly higher among boys.

Apart from the widespread use of alcohol, drug abuse and drug trafficking are rampant in the states of Northeast India such as Manipur and Nagaland. Thousands of youths have taken to the use of psychotropic drugs like heroin and brown sugar, which is an adulterated form of heroin.

Drug abuse was hardly heard of in the North-eastern state of India prior to the eighties though tobacco and alcohol abuse were prevalent. Drug abuse started rising in the early 1980s and peaked in the late 1980s. The menace is continuing till today. In some cases, the situation worsened to the extent of a mother wishing her son would die.

“Who is not affected by the ills of drug menace in Manipur?” asked a 52-year-old mother, Rahamani Nesha from Imphal East, who is struggling alone to stop her son from drug abuse. Her son is only 16 years old. But he has started using Spasmo Proxyvon tablet. As a mother, she was left with no option but to send her son to rehabilitation centres several times, and at times, she would rather have him die than suffer, said Rahamani with her eyes filled with tears as she shared her painful story to this Imphal Free Press reporter.

A 17-year-old boy from Churachandpur, who stayed at one rehabilitation centre, told this Imphal Free Press reporter that he started using the World is Yours (WY) - methamphetamine tablets - by inhaling since 2020 during the COVID-19 pandemic. He used to go to work at one place with his friend to spend time. From there he starting using WY tablets and got addicted to it.

“I earned Rs 300 per day to buy WY tablet from Kwakta,” a minor boy said. He said he wanted to test how it felt and he was slowly dragged into it. He learnt about the drug from his friends who were already addicted to WY tablet. However, when his mother found out, she along with the people in his locality handed him over to a de-addiction and rehabilitation centre in the state.

The boy along with a friend who was already addicted to WY stayed together in the rehabilitation centre. His friend is not a minor. He is 22 years old and is the bread earner of his family.

In an interaction with the friend of the minor boy, he said that he also learnt smoking or inhaling WY tablet at the workplace. At the workplace, there is a labour who consumed WY tablet as well as N10 for getting sleep at night. But most of the time, they took drugs during day time to work easily, he said.

“After inhaling WY tablets, he gets the strength to lift a cement bag easily,” the friend said.

Another 21-year-old from Singjamei Wangmataba in Imphal said that he started consuming drugs when he was in class-eight, at that time he was only 14 years old. He did not complete his graduation due to the drug addiction problem. Initially, he started using drugs orally and later shifted to consuming drugs such as Heroin or Brown sugar by smoking. He also started taking Nitrazepam or Diazepam tablets, Antihistamine tablets, Amphetamine type substances and Spasmo Proxyvon by injecting. After five or six years, he shifted to inhaling or sniffing or smoking whitener, Marijuana, Hashish, Cocaine, Opium, Magic Mushroom, LSD (Lysergic Acid Diethylamide) and Mescaline.

He said he got addicted to drugs due to curiosity and easy access to drug peddlers. Boredom and depression caused by broken relationships led him to using various types of drugs, he said. He tried different strategies to get drugs. He sold his personal belongings such as mobile phone, laptop, and even their family belongings to others to get money to buy drugs. His family put him at one rehabilitation centre. From there, he learned more about other drugs. Easy availability of drugs in the black market from other drug addicts who were admitted to the Centre is another reason for continuing using drugs. So, when he came out of the rehabilitation Centre, he started buying drugs from drug peddlers through some known contacts.

This Imphal Free Press reporter also visited several shops that sell tobacco products such as paan and gutka in different localities in Imphal valley. During the survey, it was found that most of the buyers of tobacco products are young girls of 16-17 age group who are becoming addicted to tobacco products.

One shop owner in Hatta, Imphal East said that having paan or talap or Rajnigandha becomes normal for several women. Also, chewing paan after having meal is socially permitted as a part of the culture.

In an interaction with a 22-year-old woman staying at one women rehabilitation centre, she said that she consumed alcohol when she was in 11th standard. From alcohol, she shifted to cocktail drinks (Mixing alcohol with WY or SP or N10 tablet). As she became addicted to alcohol consumption, her family beat her up and even locked her up in a room for several days.

“Addiction to alcohol drove me to run away from home last year,” she said. While she was on the road, she made new friends who were also addicted to drugs. As time passed, she became a sex worker to get some money to buy drugs. In December 2020, while she was in contact with a new hire, she was caught by police and was handed over to her family. Soon, her family put her in a rehabilitation centre.

A survey report conducted by the National Drug Dependence Treatment Centre (NDDTC) and the All India Institute of Medical Sciences (AIIMS), entitled ‘Magnitude of Substance Use in India, 2019’, revealed that a considerable number of people use psychoactive substances in India, and that substance use exists in all the population groups of 10-75 years of age.

The survey was conducted between December 2017 and October 2018, to document the detailed information of drug (substance) use problem in the country. It was found that alcohol is the most common psychoactive substance used by Indians, with 14.6 per cent and makes up about 16 crore people in the country. After alcohol, cannabis and opioids are the next commonly used substances. The report has also listed Manipur amongst the top 10 alcohol-dependent states. In the Manipur scenario, the lists of substance use range from tobacco products such as paan and cigarettes to ganja (marijuana) and alcohol, Opium, Spasmo Proxyvon (SP), Methamphetamine (WY), Codeine cough syrup, Pseudo-Ephedrine among others.

Manipur being close to the Golden Triangle in Southeast Asia (Laos, Myanmar and Thailand) is one factor behind the increase in drug trafficking and the large number drug users and HIV cases. Some of the customs and traditions of the Manipuri society also is one of the factors for the prevalence of high number of alcohol abuse. Ganja or Cannabis and home-made brew have been used for religious purposes since time immemorial. In ancient times, raw opium or kanni were also widely used as a medicine during childbirths to help ease labour pains.

But, is the Manipur government serious enough in addressing the menace of drugs in the state?

On November 3, 2018, Chief Minister N Biren Singh declared a ‘War on Drugs’. He expressed serious concern and commitment of the state government and the security forces to strictly look into the matter and reduce the number of drug users and take stringent action against drug peddlers.

A report of the Manipur Narcotics and Affairs of Border (NAB) department reveals that 963 drug traffickers, including 768 men and 195 women, were arrested under the Narcotic Drugs and Psychotropic Substances (NDPS) Act from April 27 till June 2019.

The state government also launched ‘Nisha Thadoklasi’ campaign on June 26, 2018, at the observance of International Day against Drug Abuse and Illicit Trafficking’. Further, the Manipur government has announced “War on Drugs” to curb trafficking, illicit poppy crop cultivation and consumption.

Currently, the Ministry of Social Justice and Empowerment, the Government of India launched the “Nasha Mukt Bharat Campaign 2020-21” (drug-free India) all over the country. The campaign was started on August 15, 2020, and will end on March 31, 2021. The ministry has identified 272 districts in India. Among the districts in Manipur, the ministry has identified eight districts namely Ukhrul, Chandel, Senapati, Imphal East, Imphal West, Kangpokpi, Bishnupur and Thoubal for the campaign.

During the campaign, Anouba Punsikon, a rehabilitation centre, received a good number of psychoactive substance-dependent youths as brought in by police and voluntary organisation namely Anti-Drug Cell, Tronglaobi. Some parents brought their wards and some users themselves came to get treatment at the centre, said Pradip Keisham chief functionary of Anouba Punsikon.

Many youths became psychoactive substance-dependent when they opt for drugs as a means to address their emotional burnouts or negative peer pressure, said Dr Lenin, head of the department of Psychiatry RIMS. The treatment of drug users or drug issues in the state cannot be addressed without a multiple-disciplinary approach and concerted effort, he said.

State Deputy Director (CP), Social Welfare department Konsam Saroja informed that there are three rehabilitation centres for women below 18 years in the state.