Rejuvenation of Rs 650-crore Lamphelpat project would be successful if scientific studies are carried out before the work begins, experts opine. 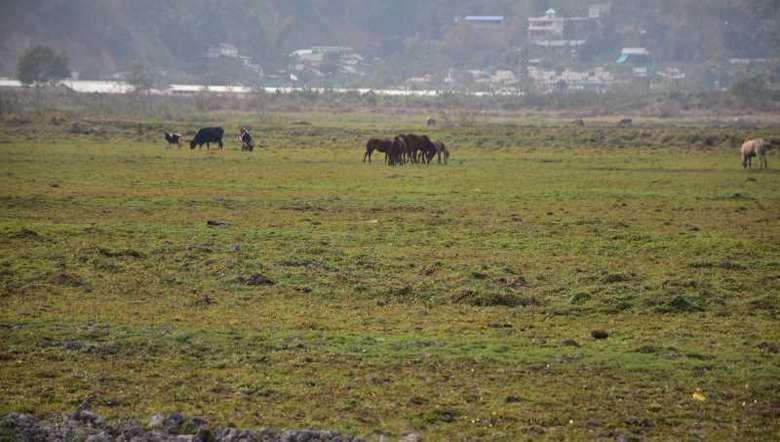 Concerned citizens of Manipur in Northeast India have taken serious note of the state government’s move to develop water bodies in Lamphelpat area, one of the last existing wetlands in Imphal valley. Amid the increasing concern, experts have suggested taking up the Rs 650-crore project only after conducting proper scientific assessment of the area and its relation with the surrounding Langol Hill Range.

Lamphelpat, one of the biggest wetlands located in Manipur’s capital Imphal, is long associated with the history, culture and ethos of the state. The wetland is a catchment area that lies near the foothills of the Langol Hill Range and is surrounded by the hill range in an arc shape.

With the ever-increasing human population over the years and unplanned urbanisation in the state, the condition of the wetland is rapidly degrading.

The Lamphelpat wetland area was once filled with lush green vegetation, with abundant flora and fauna. It was also a habitat of “Kombirei”, an endangered flowering plant of Manipur and a breeding ground of rare species of the Manipuri pony. But today, the place is gradually turning into a concrete jungle with many establishments, mostly government buildings being constructed in recent years.

For decades, Lamphelpat area was being utilised for water conservation by storing the water drained from Langol Reserved forest area. Besides this, it also helps to control floods in urban areas as excess water from the Nambul River is being stored here. Today, the whole e-flow or environmental flow of Lamphelpat is completely affected.

In the effort to restore the dying Lamphelpat wetland, the state government has initiated plans to build water bodies of around 300 acres in the area. The wetland rejuvenation project was passed in the recently concluded Manipur Legislative assembly session.

Regarding the wetland restoration project, superintending engineer of the state department of Water Resources, Irom Royal told the Imphal Free Press that the total area allocated to the department for the rejuvenation of Lamphelpat is 442 acres of land. Of it, 300 acres of the area will be used for development of water bodies to restore the wetland and the remaining will be utilised for construction of eco-tourism projects.

The project will also cover the widening of Samushang Culvert to control to-and-fro movement of water between Nambul river to Lamphelpat. This main objective is to mitigate flash floods in Imphal City, he added.

Royal further said that Lamphelpat does not serve any purpose of wetland even though it is regarded as a wetland. As such, the Water Resources department has taken up the project under the Union Jal Shakti Ministry with funding from the World Bank.

Decades ago, there were hundreds of wetlands at one point of time across Imphal valley. In fact, Manipur is known for water bodies that adds to its scenic beauty. But today most of them have disappeared and Lamphelpat in Imphal could be considered as one of the last pieces of wetland that still exist. Hence people from every section of the society wished to restore the originality of Lamphelpat in whatever land left in the said area.

In an interaction with Imphal Free Press, environmentalist, Salam Rajesh said that to achieve the objective of the Lamphelpat Restoration project, one must first conduct proper scientific assessment of the area taking into consideration its relation with Langol Hill Range.

There is a close connection between Lamphelpat and Langol Hill Range and Nambul River. Unless this system is properly analysed in a scientific manner, the project would not serve its purpose, he added.

“Using any mechanical means by excavating the area and developing a pond-like structure may give negative impact or fallout. Deforestation in Langol hill range causes heavy siltation in Lamphelpat. As such, to retain the natural characteristic of the wetland, it is much needed to preserve the Langol Reserve Forest area,” he pointed out.

Salam said the project may serve commercial purposes had the government given main emphasis on excavation of an area like a pond-like structure. However, it wouldn’t bring back all those lost flora and fauna that once enhanced the quality and beauty of Lamphelpat.

Speaking to the Imphal Free Press, state Deputy Director of directorate of Environment and Climate Change, T Brajakumar said that the condition of Lamphelpat has been worsening since around five decades ago due to anthropogenic factors. Nevertheless, it has become the lone wetland in urban areas as all other wetlands have disappeared.

Wetland plays a significant role not only in preserving wildlife and biodiversity of a place, but it also helps control flood situations and in maintaining micro-climatic conditions of the place. Considering this, there is an urgent need to preserve the wetland with proper strategies, plan and policies in place, he suggested.

Brajakumar further said that Langol Hill Range has started improving in condition. As such, the rejuvenation of Lamphelpat project would be more successful if scientific studies are carried out in the presence of various stakeholders before the project is started.

Another environmentalist in the state, Ram Wangkheirakpam told the Imphal Free Press that though Lamphelpat is one of the significant wetlands of the state, it is unfortunate to know that it has not been identified as a wetland under the National Wetlands Rules 2017.

“For me, I feel that getting the recognition of wetland by National Wetland Rules 2017 is the first and foremost step to preserving this historic wetland of Manipur,” he stated.

Putting the blame on the government for the destruction of Lamphelpat, Ram said, "For the sake of the future, it is the government's responsibility to rejuvenate the area with strong determination and political will”.

Speaking to Imphal Free Press, environmentalist RK Ranjan said that the initiative of developing water bodies in Lamphelpat area is highly appreciated. Water scarcity has become one of the major concerns for the state in recent years. This initiative would surely help in mitigating the problem of water scarcity and flood issues in urban areas.

Ranjan also suggested that the development of eco-tourism in surrounding premises of Lamphelpat like a golf court and Oxygen Park among others would help to maintain the characteristic of a wetland in Lamphelpat.