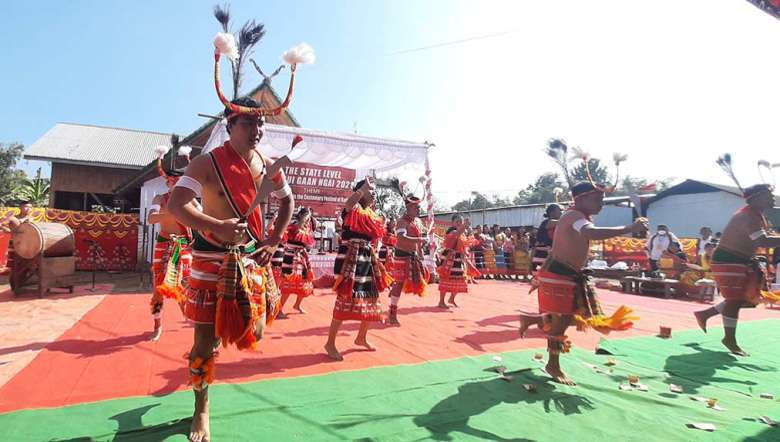 The celebration of Gaan Ngai, one of the biggest and longest festivals of the Zeliangrong community in India, began on January 26 with the traditional lighting of the lamp with the sacred fire ignited with the ancient system of mai-labmei (extracting fire by rubbing a piece of bamboo and a dry wood together) and the serving of traditional wine to the supreme god. Rhythmic folk music and dances by young boys and girls in vibrant traditional attires and great feasting marked the colourful celebration across the state.

The five-day long festival which today has come to be observed as a one-day state festival has helped to preserve the age-old rich culture, tradition and beliefs of this tribal community spread over Manipur, Nagaland and Assam, to this day. The Zeliangrong community comprises of three Naga tribes - Zeme, Liangmai and Rongmei. Puimei Naga has been added to the comuunity in recent years.

This year, the state-level celebration, organised by Kabui Gaan Ngai Celebration Committee, was held at two places in the valley area on Tuesday, with the festival theme - ‘Loss of religion is loss of culture, loss of culture is loss of identity’.

The celebration of the festival was held at Duigaipangjang Kabui village, located in Imphal West district and Iboyaima Sumang Leela Shanglen.

While the inaugural fire is ignited by young men and the lamp lit by the officiating chief guest of the function, the traditional wine is served to the Supreme being by an elder of the community. The wine is locally made for local consumption.

Although Gaan Ngai, as a festival is celebrated by performing several rituals of the community, some scholars and elders in the community say that it is not a fesival of religion but a customary festival embedded with customary rituals.

“Gaan Ngai is not a festival of a religion but a customary festival embedded with customary rituals performed by village authority or pei as it is called in local dialect, not by religious cults,” Kabui Union Manipur president K Heera Kabui said.

Gaan-Ngai falls on the 13th day of ‘Wakching’ month in the lunar calendar year of the Manipuris, Kabui said.

Several traditional and cultural activities are carried out with the involement of both men and women, young and old.

“Gaan Ngai is not only a festival of merry making but a festival of composite activities. Even though the state government has recognised the celebration of Gaan Ngai only for one day, it is celebrated for four-five days during which various cultural and religious activities are performed.

“On the first day of the festival, prayers are offered to forestall any kind of disturbances, and the elders of the village advice members of each household to enjoy the festival peacefully… stern warnings against any form of conflicts are given out,” Director, Economics and Statistics Manipur, Reijonna Kamei said.

Earlier, Governor Najma Heptulla, in her greetings to the people of Manipur, particularly the Zeliangrong community, on the occasion of Gaan Ngai 2021, stated: “The Zeliangrong community celebrates Gaan Ngai festival, which is the ‘Festival of Winter Season’, for paying obeisance and homage to those departed souls who left this temporal world in the year before. The festival also symbolises bidding adieu to the old year gone by and heralding a New Year, full of hope and aspiration.

“One positive development of this year is that the festival along with its religious fervour has become a major cultural event of not only the Zeliangrong community but of other communities as well,” she added.

Chief Minister N Biren Singh said in his message to the people of the state that “Gaan Ngai, the biggest cultural and religious post harvest festival of the Zeliangrong Community marks the end of the year and beginning of the new year… During the festival, the community offers thanksgiving to God for the good harvest and pray for a successful life in the coming year”.

“Chakan Gaan Ngai festival is the single most popular festival of Zeliangrong people living in Assam, Nagaland and Manipur…, during the festival Tingkao Ragwang, the almighty god, is worshipped and offered thanksgiving for a good harvest in the future and a successful and long life in the coming year,” Speaker Yumnam Khemchand Singh said in his festival greetings to the people.

Ahead of the festival, a book on the festival entitled – The Gaan-Ngai (A Ritual Festival), an attempt to preserve the culture and traditions of the people, was released.

Releasing the book at the event organised by the festival organisers, retired professor, Manipur University, N Joykumar Singh, said that the Kabui community in Manipur has given huge contributions in the “civilisation” of the state.

“The composite history of Manipur can be known only if the contributions of all communities of the state are given focus,” he said, adding that “no single community can represent Manipur”.

Urging the young generation of the Kabui community to further study the historical backgrounds of the community, he said that “any community will lose its identity once they lose their culture”.

Joykumar also said that the Gaan Ngai festival is a “deep-rooted symbol and identity of the Kabui people”.

“A ‘positive religion’ like Christianity, Buddhism and Jainism are set up based on the ideology of a person. However, customary religions like the traditional Kabui religion are derived through their own culture,” he explained.

Today, the festival is celebrated in different parts of the country by the community people who have migrated to other cities and towns. Efforts are made to create awareness, promote and preserve their traditions and cultural identity by organising cultural events on this day.

Tarao: How the 'Forgotten tribe' of Manipur is battling to survive