High voters turnout rate in reported from every polling booth. Voters were seen strictly adhering to COVID-19 protocol during the polling that will end at 5 pm Saturday. 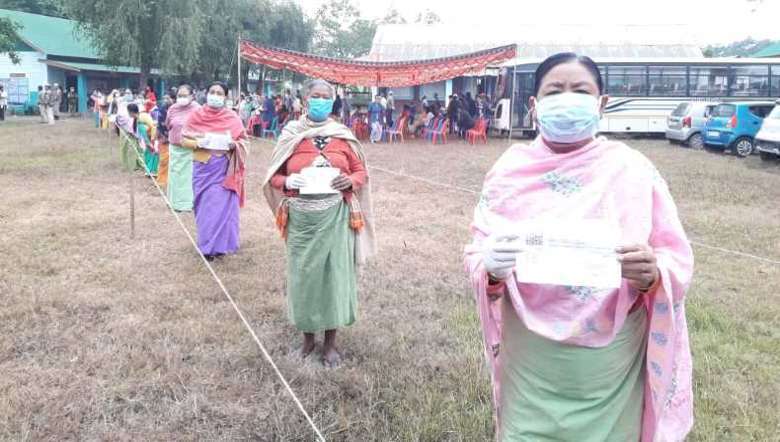 Polling in 203 polling stations in four Assembly constituencies of Manipur began 7 am Saturday with strict adherence to the COVID-19 protocol issued by the Election Commission, amid tight security arrangement. Voters were seen quening up to exercise thier franchise by maintaining physical distancing and wearing hand gloves and masks.

Voters turnout rate in every polling booth is reported high. To all the voters who had come to cast their votes, essential items such as face masks, hand sanitizers and hand gloves were distributed in every polling booth by the ASHA and Anganwadi workers as a precautionary measure to prevent spread of COVID-19 during elections.

As many as 1,35,212 electorates, including 66,807 males and 68,400 females, are expected to cast their votes for the 11 candidates in fray for the by-elections to Lilong and Wangjing-Tentha seats in Thoubal district, Wangoi in Imphal West and Saitu in Kangpokpi. Of the 11 candidates, four are INC, three BJP, three independents and one NPP.

For the first time, the state has introduced ‘mark-III’ electronic voting machine (EVM) and voter-verified paper audit trail (VVPAT) that are procured from Assam and Mizoram and manufactured by ECI limited.

Around 2,294 polling personnel, including security, are being stationed in the 203 polling stations spread across the four constituencies for the voting  which will conclude at 5 pm Saturday.

Wangoi has a total number of 205 polling personnel, including security will be used in 41 polling stations and 28828 voters will cast their votes to seal the fate of three candidates, BJP, NPP and INC. The candidates are Onaim Lukhoi Singh of the BJP, Khuraijam Loken Singh of the NPP and Salam Joy Singh of the INC

Saitu bypolls will be a straight fight between arch rival BJP and INC. Veteran politician and BJP candidate, Ngamthang Haokip will be up against a new face Lamtinthang Haokip of INC.

The counting of votes will be conducted on November 10.

No advertisements shall be published on by-election day or prior