To prevent any form of violence in the state, every citizen should respect other communities, and leaders should treat all communities as one, the chief minister said.. 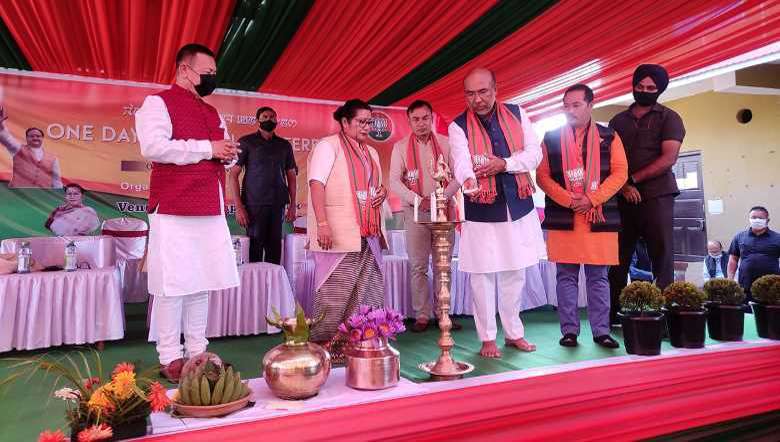 Expressing concerns over the need for maintaining peace among all ethnic communities of the state, Manipur Chief Minister N Biren Singh said that suppression of rights of one’s community is the root cause of clash between communities.

The only way to bring peace and tranquility in the state is that every community such as Meetei, Naga, Kuki and Meitei Pangal should be treated equally, Biren said during the one-day political conference held at Tera Bazar, Sapam Leirak organised by the BJP-19 Patsoi Mandal on Sunday.

Biren said that the real meaning of politics is to safeguard and protect every communy of the state by guaranteeing them their constitutional rights. The main cause of communal clash and instability in the state is the supression of one’s community by the other, he stated.

To prevent any form of violence in the state, every citizen should respect other communities and leaders should treat all communities as one.

Biren said that since the inception of the BJP government in the state, many changes have been brought about which the Congress government couldn’t do in their 15 years reign.

The CM also stated that though India got independence 75 years ago, a larger number of citizens of Manipur were unable to get drinking water. However, under various scheme of the BJP government, 54 per cent of the state has been provided tap water and the government is targetting to cover 80 per cent of the population by December, he added.

Biren also pointed out that Imphal-Jiribam is the alternative lifeline of Manipur. But unfortunately the previous government failed to construct even a single bridge along the route. However the BJP government constructed three bridges such as Jiri-Makru bridge, Barak Bridge (ready to inaugurate) and Irang Bridge (under construction). Besides these, railway service will be launched till Khongsang before election, Biren confirmed.

While highlighting various specific schemes and works done by them like CMHT, PMJAY, Health for All, Start Up, improved law and order situation, inauguration of oxygen plant in all districts, he said that the present government really works knowing the needs and sentiment of the people of the state.

The state is progressing very fast and it couldn’t be possible without the support of people of the state, he noted. He further said that the BJP government at the centre is really concerned about Manipur. In order to bring more development, people should continue to extend their support and cooperation to the BJP, the CM added.