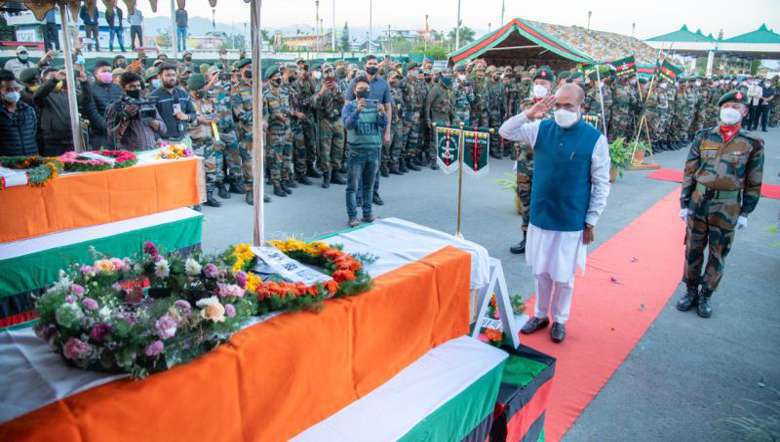 Manipur Chief Minister N Biren Singh, along with high ranking police officials and Assam Rifles on Sunday paid last tributes to the martyrs who were killed during an ambush carried out atBehiang T village, Churachandpur district on Saturday.

Later the bodies were taken to Bir Tikendrajit International Airport, Imphal for the wreath laying ceremony.

Speaking on the sideline of the ceremony, CM Biren recalled that the incident occurred on Saturday in a terrorist act and added that he has instructed home department and other paramilitary forces to nab the perpetrators and punish them according to the rule of law. He said security forces along the border area will be strengthened in order to prevent such act in the near future.

Responding to media, he said to seal the porous border of Indo-Myanmar along the stretch of Manipur and Myanmar border, fencing work has started and almost 40 kilometre have been completed. Due to some land dispute in some border area the fencing work is in pause but central and state government will take necessary steps to resume the border fencing work, he added.

He shared his deepest condolence and grief with the bereaved families. The government will not tolerate and will never compromise such terrorist act in the State, he said.

Later the bodies were airlifted to their respected birth place.