On World Mental Health Day, Indian Psychiatric Society, Manipur State Branch president Dr S Manikanta said that here is a need to have psychiatric wards in every private hospital with a capacity of 50 beds. 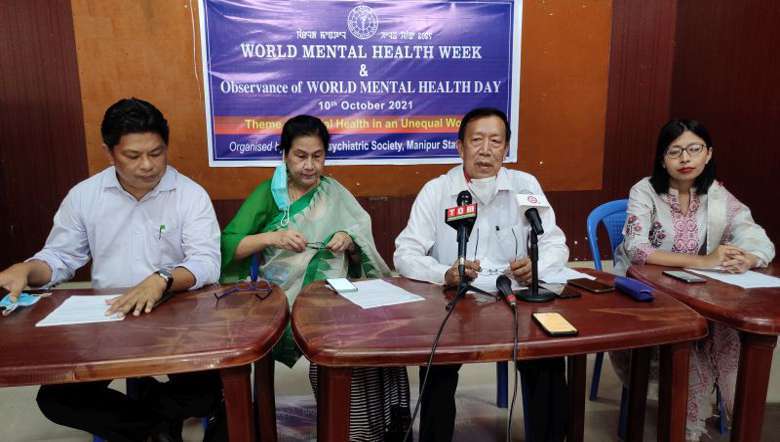 Concerning increase in various types of mental illness, there is dire need to set up a mental hospital in the state at the earliest, suggested Indian Psychiatric Society, Manipur State Branch president Dr S Manikanta.

He informed that World Mental Health Day has been observed every year on October 10 since 1992 under different themes. This year, it is observed under the theme ‘Mental Health in Unequal World’, which is quite apt with the present context.

He continued that as per reports, one billion people in the world have mental health problems and 14 per cent of India’s total population suffer from health disorders.

ALSO READ: What is deterring the setting up of a mental hospital in Manipur?

Amid this situation, the ongoing pandemic has hugely impacted the mental health of people and it is expected that the issue will rise to five times from the earlier cases, he added.

He also said that Manipur is among the states with the highest number of mental health problems caused by many social and economical issues. As the state has been grappling with the problem of high substance abuse, 23 per cent of total populations have mental disorder due to drug addiction.

Reviewing the present situation of mental health issues, it is high time to extend collective effort by all sections of society, families and government, he added.

Stating some of the immediate measures to combat the mental health issue, Dr Manikanta said that the need of the hour is to establish one mental hospital in the state. Moreover, there is a need to have psychiatric wards in every private hospital with a capacity of 50 beds. All the health and wellness centres, and primary and district hospitals should also provide treatment for mental health problems.

On top of this, society and families should not stigmatise or discriminate against people with mental health issues as it is treatable if it is detected at the right time, he added.

Mental health is one of the neglected public health issues that give many impacts to society, she added while informing that stress can be a major causing agent to create many other ailments.