IFP Editorial: The shift of poppy cultivation in areas of Manipur could have been a direct fallout of the diminishing trend in the Golden Triangle and Myanmar. Yet, if all of the hills are under poppy cultivation, it would only be a tiny fraction of the global drug production. 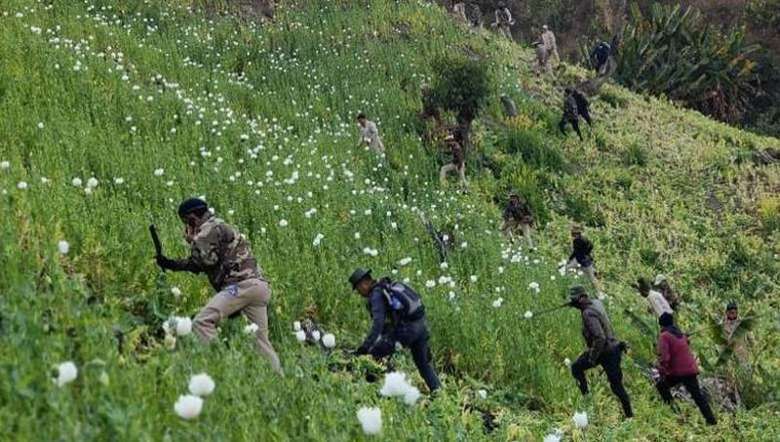 It is indeed amazing that the overall drug scenario had changed so much in recent times and now the time has come for a deeper introspection as to how it has evolved to such a state and what facilitated the proliferation of home-grown drug manufacturing units within the boundaries of the state itself. Decades ago, Manipur was just a transit point in drug smuggling originating from the infamous Golden Triangle, as it shares a 400 km long border with Myanmar. Acetic Anhydride and other acids used in manufacturing Heroin used to be smuggled from the Indian side through Manipur in large quantities then. The Golden Triangle is an area where the borders of Thailand, Laos, and Myanmar meet at the confluence of the Ruak and Mekong rivers. The Golden Triangle is commonly used more broadly to refer to an area of approximately 950,000 square kilometres that overlaps the mountains of the three adjacent countries. Along with Afghanistan in the Golden Crescent, it has been one of the largest opium-producing areas of the world since the 1950s. Most of the world's heroin came from the Golden Triangle until the early 21st century.

Three decades ago, this region produced more than 70 per cent of all opium sold worldwide, most of it refined into heroin. Today the area averages about five per cent of the world total, according to the United Nations Office on Drugs and Crime. The Golden Triangle has been eclipsed by the Golden Crescent - the poppy-growing area in and around Afghanistan that is now the source of an estimated 92 per cent of the world's opium, according to the United Nations, which bases its statistics on satellite imagery of poppy fields. Perhaps the most striking aspect of the decline of the Golden Triangle is the role played by China in pressuring opium growing regions to eradicate the crop. The area of Myanmar along the Chinese border that once produced about 30 per cent of the country's opium was last year declared opium-free by the United Nations.

Point is, one needs to look around for answers. The widespread poppy plantations and the home-grown drug manufacturing units did not develop overnight. Somehow, conditions became ripe for such a development in course of time. Of course, poppy plantation in Manipur hills was there mainly in the regions bordering Myanmar and the opium extracted from these poppy fields was generally meant for supply to minor heroin manufacturing units just across the border. Journalists travelling in the interior areas have reported of poppy fields near the border about two decades ago. In recent times, it was revealed through reports of certain government agencies like Narcotic Control Bureau and state police that poppy plantation is indeed widespread in the hills of the state and the agencies are having a hard time dealing with it.

Perhaps, the shift of poppy cultivation in areas of Manipur could have been a direct fallout of the diminishing trend in the Golden Triangle and Myanmar. Yet, if all of the hills are under poppy cultivation, it would only be a tiny fraction of the global drug production, a major portion of which had already shifted to the Golden Crescent area. So, who would be interested in the opium produce of Manipur hills or who is buying it? It would be interesting to note that poppy cultivation and drug manufacturing units have not completely vanished from this part of the world, although it has diminished to a great extent. There are still some players across the border. Here we must understand, a venture in large scale ‘illegal’ cultivation of poppy does not come out of the blue to some ‘enterprising’ hill chieftain or businessmen. Because there is always the matter of a risky investment and a reliable marketing network before embarking on such a venture. In short, one needs to be an old hand in the trade. So, the most important job should rather be the search for the investor and his agents working in the field. Well, whittling away in the poppy fields with bamboo strips is fine. But, time is precious and we should rather be chasing the money trail.