JCCWB reiterated to take an immediate action to conserve Sangai by introducing a Sangai Project in the line of Project Tiger. 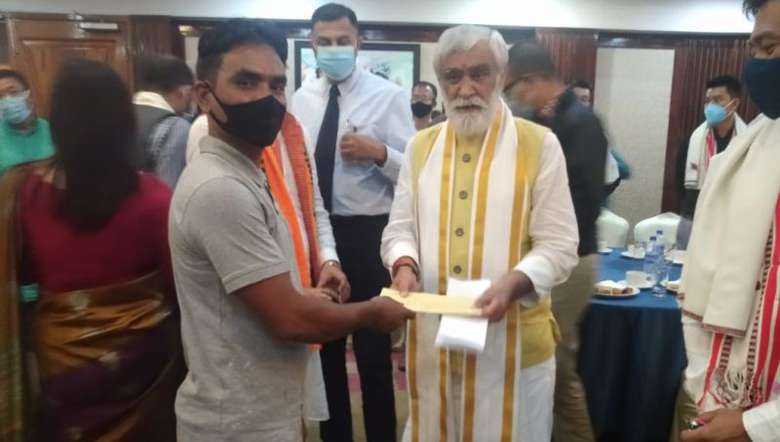 The Joint Co- ordination Committee on Wildlife and Biodiversity (JCCWB), an umbrella organisation of wildlife and environment enthusiasts working in Manipur submitted a memorandum to Union Minister of State, Forest and Climate Change Ashwini Kumar Choubey during a meeting with representatives held at Hotel Classic Grande on Tuesday.

The memorandum signed by the convenor, JCCWB Romesh Ningthoujam sought intervention into environment and wildlife crimes in the state of Manipur and an immediate action.

The memorandum stated that Manipur is known for its rich biodiversity including endemic flora and fauna. It stated that the issues of deforestation, poaching activities, encroachment to reserved areas and wetlands, illegal earth excavation at reserved hills and others have also been increasing in the state in spite of various efforts being made by the state forest department and many NGOs and civil organisations.

“In the near future, we may face many alarming consequences and many other severe natural calamities owing to the reckless degradation of our mother nature. It has pained us enormously and at the same time draws our concern on such a horrible and grave situation,” it stated.

It stated that the organisation has encountered many incidents of breaking or defying wildlife, environment, and forest laws by some powerful and politically backed persons. “Our Forest department and even the police department are helpless sometimes in such situations.  So, the request of JCCWB is to take up a stringent action to those persons who are defying laws and make a policy to stop such activities permanently,” it stated.

JCCWB reiterated to take an immediate action to conserve Sangai by introducing a Sangai Project in the line of Project Tiger. “The importance of our Sangai is not less than that of our tigers. Our Sangai will be on the verge of extinction if not protected with our best efforts,” it mentioned.

It urged to take up intervention to uplift the economic condition of poor people inhabiting around the National Parks or Protected areas and  hill areas of Manipur by providing them financial assistance, promoting eco-tourism, giving a percentage of reservation in the recruitment rallies of government agencies so that they can deviate from anti-environment activities.

JCCWB appealed to take up an initiative to strengthen environment, forest and wildlife protection Acts and Laws in hill districts of Manipur. “It is clear that fresh meats of rare and endangered animals are being sold in open markets of hill areas of Manipur. It is very unfortunate and these practices should be stopped immediately to save our wild animals,” it stated.

It further urged to introduce a policy for compulsory adoption or planting of at least one tree by every student as a part of his or her academic activity in a year. Thousands of trees will be added every year once this policy is implemented in every educational institution, it added.

In the memorandum, JCCWB also urged to make a policy for introduction of at least one Model Green and Pollution Free Village in every assembly constituency of Manipur.

“Recently our state Forest department confirmed the existence of tigers in Tamenglong district of Manipur.  Please take up an urgent step to protect the site as a Tiger Reserved Area under Tiger Project,” it stated.

Pointing out that the cultivation of poppy plants in hill regions of Manipur, in spite of strenuous efforts by state government, is expanding in a rapid pace by clearing dense forests which leads to deforestation, the organisation urged to look into the matter seriously and introduce a Long Term Alternative Livelihood Missions for communities which practice poppy cultivation.

It also urged the union minister to encourage the voluntary organisations/individuals that have made commendable contributions in the field of environment and wildlife conservation by providing financial assistance as well as material support.

Lastly, it urged the union minister to insist the state government to introduce a Tree Preservation/Transplantation Act for preventing cutting of big trees during highways expansion and other development projects.