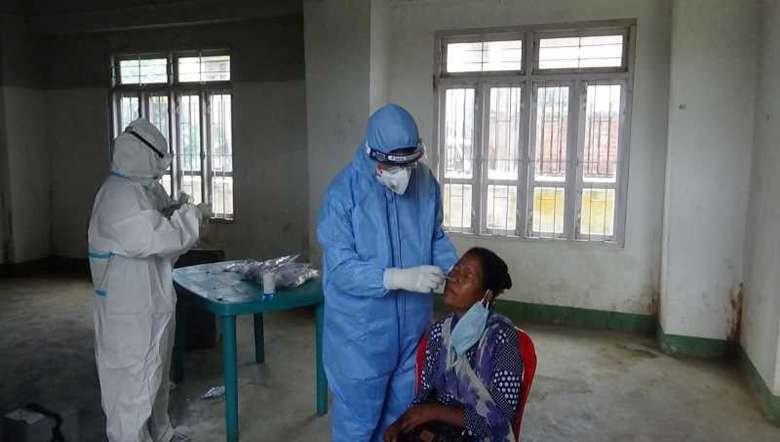 Considering the untold sufferings of the economically backward people caused by the COVID-19 pandemic in the country, the Central government launched free COVID-19 testing and treatment under the Ayushman Bharat-Pradhan Mantri Jan Arogya Yojana (AB-PMJAY), a cashless health insurance policy of the Central government. Likewise, the Manipur government also announced to provide COVID-19 treatment under the Chief Minister -gi Hakshelgi Tengbang (CMHT). However, the number of people treated for COVID-19 under the schemes is very low compared to the number of people affected by the virus.

Manipur has a population of just around 27 lakh. Of it, 1,18,870  people were being affected by COVID-19 and the disease has claimed 1,835 lives as of September 21, 2021. However, despite its high number of economically weak population, only around 1100 beneficiaries were treated for COVID-19 under the schemes till August

As per information received from health directorate, the number of beneficiaries who had availed COVID-19 treatment under AB-PMJAY is 517 till August 21 with a total enrolled beneficiaries of 3,23,409.

Both the insurance health schemes can be accessed in 44 empanelled hospitals located in Manipur. The facilities can be availed in 33 public hospitals and 11 private hospitals.

When enquired about the less number of people treated under the health schemes even during this health crisis, IEC manager, state health agency Manipur, Rinsophy Chamroi told the Imphal Free Press that as per norm of these cashless health insurance, beneficiaries can claim the benefits of it at the time of admission in the hospital. Even if they forget to bring the card on the first day of admission, the patient can produce the card within five days to avail the CMHT and seven days for PMJAY. But most of the patients usually claimed complete treatment, she said.

Chamroi said the main reason is lack of awareness on accessing these health schemes. Simplifying the process of accessing the card in every hospital would help more number of beneficiaries to avail the schemes, she added.

Enrolling for the health cards through common service centre or some private agencies are some of the contributing factors that make beneficiaries unaware of its utility, as the schemes are not explained to them in detail. Beneficiaries would be able to know in detail had they applied at health card counters opened by the government in every DC office, community health centre, primary health centre and government hospitals, she said.

The health department has been conducting awareness programme of these health scheme, she added.

CMHT with a health cover of Rs 200,000 per family per year was launched by Chief Minister N Biren Singh on January 21, 2018 for the poor population in the state to help them with financial aid for medical treatment. It covers secondary and tertiary care hospitalization. The Scheme has provision for payment of Air / Train fare to the Beneficiary plus one Attendant for treatment outside the state. Bona fide citizen of Manipur who belongs to any of the category, that is AAY, Widow, Disabled are eligible to avail the scheme benefits. Bona fide citizen of Manipur who claim to be poor and needy but does not include in any of the above-mentioned category may apply for eligibility of the scheme for the DC verification process.