Will give priority for development to schools producing awardees, says RK Ranjan

Pointing out that teacher is the most respectable and highest standard profession as they are guiding the future generations, Ranjan asked the general public to honour and give best regards to the teachers of Manipur. 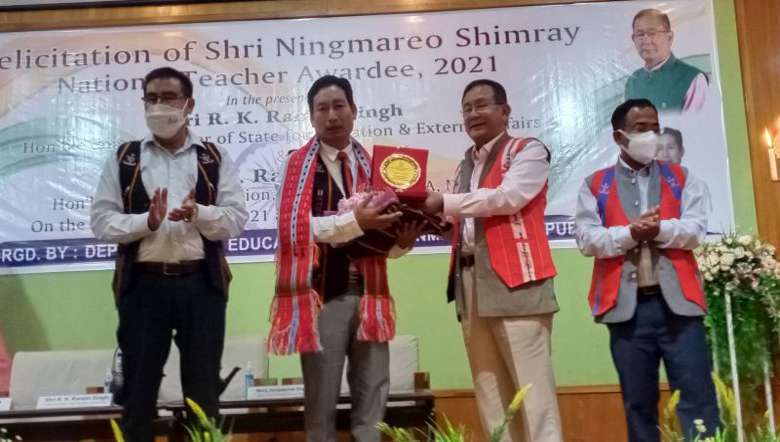 Priority for infrastructure and overall development of government schools will be given to those producing national and state awardees, Union Minister of State for Education and External Affairs RK Ranjan said in Imphal on Monday.

Ranjan made the annoucement in his speech as chief guest at the felicitation of National Teacher Awardee 2021 Ningmareo Shimray held at Hotel Classic Grande in Imphal. It was organised by the Education (S) department.

Informing that Prime Minister Narendra Modi is targeting to establish 28 new universities in the Northeast states in line with the implementation of National Education Policy (NEP), 2020, Ranjan said that unlike the traditional forms of education, those universities will be based on skill development.

He said the prime minister had given strong instruction for inclusion of at least 100 unsung heroes from Northeast who had fought against the British imperialism, in the syllabus of NCERT.

Asserting that such syllabus will be helpful in instilling the spirit of nationalism to the students, he asked the teachers and authority concerned of the Education department to take necessary steps.

Ranjan said that the new NEP was drafted after overseeing the loopholes within the educational system, to meet the growing needs of changing times.

The NEP is also envisaged to address two core issues. It aims to address the problems faced by the education sectors and to solve the problem of unemployment, he added.

Pointing out that teacher is the most respectable and highest standard profession as they are guiding the future generations, Ranjan asked the general public to honour and give best regards to the teachers of Manipur.

Education Minister S Rajen in his presidential speech said it is worth remembering why every year Teacher's day is being celebrated to honour and respect the teacher. For shaping a bright future, teacher is much indespensible in every field and without mentorship and teacher, a bright future is almost impossible, he added.

In this regards, Rajen appealed to all the teachers to take their profession wholeheartedly and to stick to their ethics.

Recalling the recent upgradation of nine high schools in Manipur to higher secondary level, he informed that another two-three schools is on the pipeline for upgradation to meet the demands of class 10 passed students.

Fifty-three years old Ningmareo Shimray, from Tangrei, Ukhrul district is a lone recipient from the state who received the award for his service in the field of Education.

Shimray is a mathematics lecturer in Ukhrul Higher Secondary School, who discovered a new number system called 'Bi-Quartet Number System', a teaching strategy which the students from standard 1 to 12 can learn maths easily.

He also developed a new concept of learning English called 'Sub-Syllables', which enable the students to pronounce any words in English dictionary correctly and efficiently.

For his dedication in teaching, the Manipur Education department also honoured and rewarded him with Rs 1 lakh during the State-level celebration of Teacher's Day at City Convention.