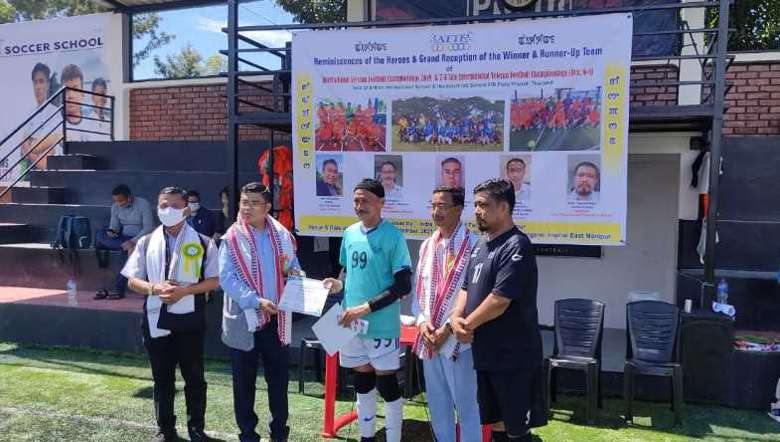 The Asian Track and Turf Federation, Manipur (ATTFM) organised ‘Reminiscences of the Heroes and Grand Reception of the Winner and Runner-up Team’ in felicitation of veteran international football players at POLOI artificial football turf, Chingarel, Imphal East district on Sunday.

Asian Track and Turf Federation Manipur secretary, Kiran Yendrembam, who is also the team manager of the Indian veteran football team, said that the government should implement a special sports policy so that veteran sports persons can also contribute not only for the state but also for the country.

To promote more sports, the state government should implement the policy so that veteran sportspersons could make their contribution just lke they had been contributing during their youths, he added.

Attending the programme as guest of honour, office coordinator of the directorate of Ayush, S Tondang said that the state is proud of the veteran football players who brought fame not only for the state but also for the country. He said that Manipur’s contribution in sports is known at international level.

Also Read: Trial selection to be held for Manipur Wushu team at Takyel

President of Asian Track and Turf Federation, Manipur, Birendra Kangjam extended his gratitude for organising such a programme in honour of the veteran football players.

The veteran football players can contribute more if the state government takes necessary welfare policy for the veteran sports person, he added.