Yongchak is the main source of income of the village. Almost all the households of Willong Khunou and Rajaimei village of Senapati district depend on Yongchak for earning. 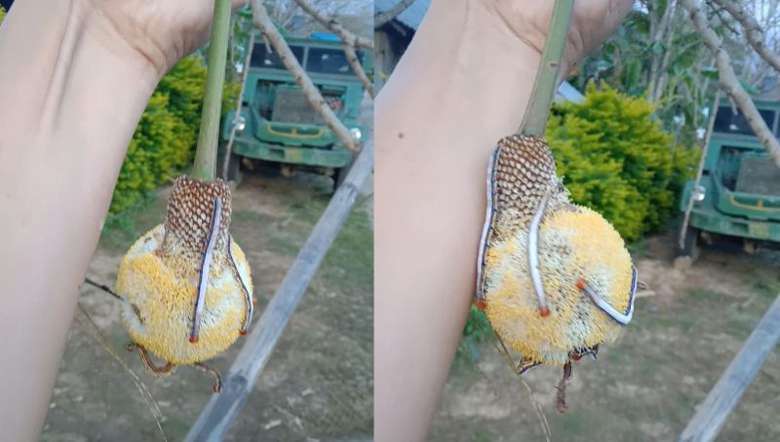 A large number of Yongchak trees (Tree Bean) in Willong Khunou village of Senapati district in Manipur are reportedly infested by an army of invasive caterpillars identified as Pericyma, a type of defoliator, causing panic among the villagers.

It is reported that almost all the trees of the village which borders Nagaland are infested by the caterpillars.

“Annually, villagers earn around Rs 2 lakh approximately from producing Yonchak which is a popular delicacy in the state. Now, the villagers are apprehensive of losing their livelihood,” the villager by the name Bosco said.

Yongchak is the main source of income of the village. Almost all the households of Willong Khunou and Rajaimei village of Senapati district depend on Yongchak as their source of income. Every house has 30-40 Yongchak trees. The semi-loppers have not spared even the newly planted trees.

The pests have even started entering the houses. It is the first time such insects have eaten all the trees, the villagers said.

“The village started Yongchak cultivation for the last five-six years and has been giving importance to the plant as a source of livelihood. Earlier, the Yongchak trees were not given much importance even if they grew vastly,” he added.

A joint team of Krishi Vigyan Kendra (KVK) Senapati and e-loumee, a platform for farming experts, visited the hill village located about 150 km northwest of Imphal on Sunday and confirmed the development. They visited the village to oversee the situation, said farm manager of KVK Senapati Homen Kangjam. “We’ve also collected pest samples for further study,” he said.

These loopers are seen in large numbers in every Yongchak tree and village areas, including house walls, he said.

As reported, Pionciana looper larvae can cause extensive defoliation, reduce flowering and become a nuisance to residents as caterpillars drop from trees. It had been reported to feed on Delonix regia, Desmanthus virgatus, Peltophorum.

However, in Korba, the larvae of Pcruegeri were observed feeding on young leaves of Delonix regia. The first outbreak of P Cruegeri was reportedly noted during August 2020 from the Korba and Katghora regions of Chhattisgarh.

Plant protection scientist Krishnakumari Devi told the Imphal Free Press that the pests may come from the same host family.

“It may also be due to changing climate, temperature or weather. Insects can reach from place to place. So, while reaching the village the insects might have found Yongchak as their food and consume everything i.e. from leaves to the flowers of trees. These can be further confirmed by studying them in a laboratory,” she added.

Meanwhile, officials of the Horticulture and Soil Conservation department have started remedial measures by spraying the trees with organic medicines.

District horticulture officer Kh Upen, told the Imphal Free Press that the samples have been sent to the Indian Council of Agricultural Research for investigation.

Indian Council of Agriculture Research, joint director I Meghachandra sent a confirmation of the semi lopper to the director of Horticulture and Soil Conservation, stating that the sudden outbreak of the unidentified insect noticed in some places of Senapati district is Pericyma species, a type of defoliator semi-looper.

The recommendation dose can be mixed properly with a sticker of 2-3 ml litres of water. For spraying on all trees particularly in the hill slopes, drone sprayers are recommended for larger coverage. It is mentioned that the same insect/pest is also reported from Ukhrul and Kamjong district as well.