Human Rights Alert (HRA) executive director Babloo Loitongbam said that since the government failed to remove the disturbed area status as recommended by the MHRC, the various human rights groups and activists will take up necessary steps. 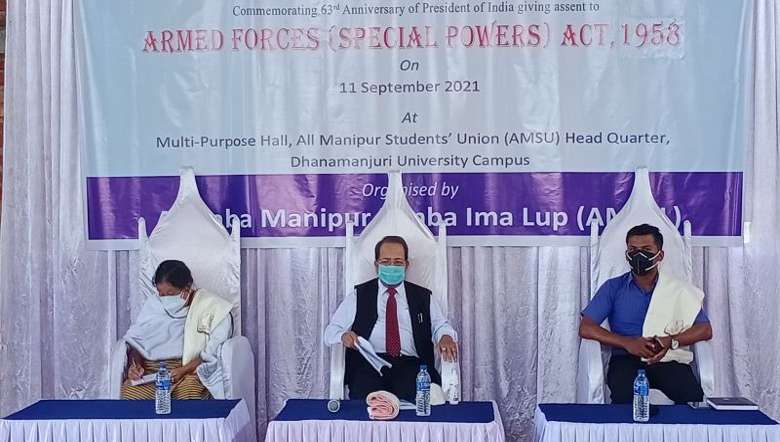 Human Rights Alert (HRA) executive director Babloo Loitongbam on Saturday demanded answers as to why the disturbed area status is not removed yet from the whole state of Manipur when the chief minister himself declared that the law and order situation of the state had been tremendously improved.

He raised the question while speaking to the media on the sidelines of ‘Women's round table on Invisible 9/11’ programme that was held, commemorating the 63rd Anniversary of President of India giving assent to Armed Forces Special Powers Act (AFSPA), 1985 at the office of All Manipur Students' Union (AMSU), Imphal. It was organised by Apunba Manipur Kanba Ima Lup (AMKIL).

He said that for the whole world, '9/11' is remembered as the day when terrorists attacked the Twin Towers in New York. However, in the context of Manipur 9/11 is the day when the people’s right to live was suspended by enforcing the draconian AFSPA act.

He recalled the recommendations given by the Manipur Human Rights Commission (MHRC) to the state government to remove 'disturbed area' status from Manipur and setting a deadline on November 4, 2021.

If Chief Minister N Biren Singh was really a human rights activist as he had frequently stated, the disturbed area status would have been removed from the whole state of Manipur, said Babloo.

Since the government failed to remove the disturbed area status as recommended by the MHRC, the various human rights groups and activists will take up necessary steps to mount pressure on the government, he added.

He said though incidents of fake encounter cases have stopped taking place in the state, the general public is still apprehensive and continue to live in fear as AFSPA is not completely removed from Manipur.

Pointing out that the investigation report of 39 fake encounter cases had been submitted to the Supreme Court by the CBI, he said prosecution sanction has not been given to any of the army personnel involved in the cases as they are protected by the AFSPA.

“AFSPA is an act of declaring war against democracy. We are hoping that the court will surely deliver justice to the victims of the fake encounter cases,” he further said.

Advisor of AMKIL Khangembam Anandi while delivering the keynote address said AFSPA had been given a shield to the various heinous crimes committed by the security personnel in the name of armed conflict.

Citing the incident of the alleged murder and rape case of late Th Manorama by the armed forces and various other crimes, she said, “It is our duty as a mother to fight against AFSPA and save the future generations from this black law.”

An audio recording on the topic, ‘Sixty-three years of AFSPA in Manipur: A Historical Perspective’ by the author of India's War on Democracy: The debate on AFSPA, 1958 Malem Ningthouja was showcased.

The function was attended by acting chairperson of MHRC Khaidem Mani as chief guest, president of AMSU H Chalamba Meitei as guest of honour and president-in-charge of AMKIL Nganbi Leima as president.