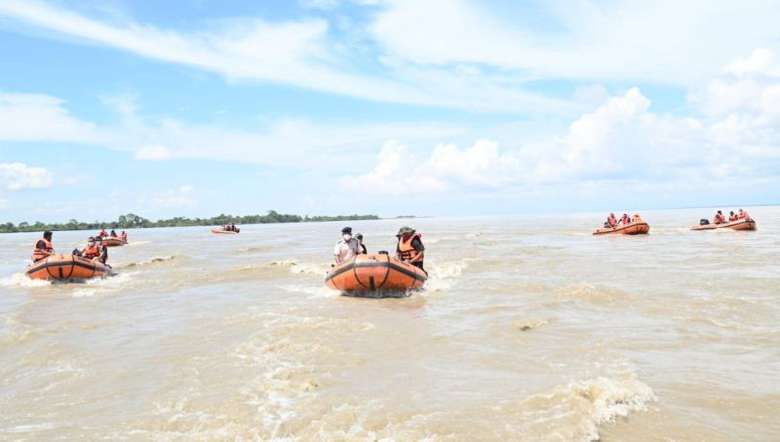 Assam Chief Minister Himanta Biswa Sarma on Thursday directed the Jorhat district administration to file a criminal case on the tragic boat accident in Jorhat which left one woman dead and two other persons missing.

CM Sarma also said that a high level inquiry will be instituted by Thursday.

The incident happened after two passenger boats collided with each other in the Brahmaputra river in Jorhat district around 4pm on Wednesday.

As per the preliminary report by the Assam State Disaster Management Authority, the incident happened after two passenger boats collided with each other at Nimati Ghat in the Brahmaputra river in Jorhat district around 4pm on Wednesday.

One boat - MB Tipkai was coming from Majuli which collided with the Ma Kamala boat leaving from Nimatighat, Jorhat. Ma Kamala boat with 90 passengers onboard capsized. The capsized boat has been cut open by NDRF and SDRF teams but no dead bodies have been found, the SDRF said.

Eighty-seven people have so far been rescued while two passengers are still missing and rescue operations are underway, the chief minister said in a tweet.

Following the accident, three officials of the Inland Water Transport Department have been suspended.

"Three officials of Inland Water Transport Department have been placed under suspension in this accident case," CM Sarma tweeted.

The chief minister also informed in a tweet that plying of private ferries will be stopped. However, if owners wish to convert a single engine to a marine engine, the state government will provide a grant of Rs 10 lakh with 75 per cent subsidy, he added.

"From today, plying of private ferries will be stopped as they don't have marine engine. If owners wish to convert single engine to marine engine, GoA will provide grant of Rs 10 lakh with 75% subsidy. SoP will be issued to schedule health check ups of those working on boats," the chief minister said in another tweet.

The chief minister also condoled the death of Parimita Das, 30, in the boat accident and assured to extend all needful support.

"I'm deeply pained at the demise of Ms Parimita Das of Kahilipara, Guwahati, whom we lost in the boat accident. GoA stands by her family in this hour of grief and promises to extend all needful support. I shall be meeting her parents soon. May her soul rest in peace," the chief minister said in another tweet.