The Zilla Parishad member of 14-Uchiwa, Haji Tayeb Ali alias Manoj was welcomed to the party by the Manipur Pradesh Congress Committee (MPCC) at its head office, BT Road, Imphal on Monday. 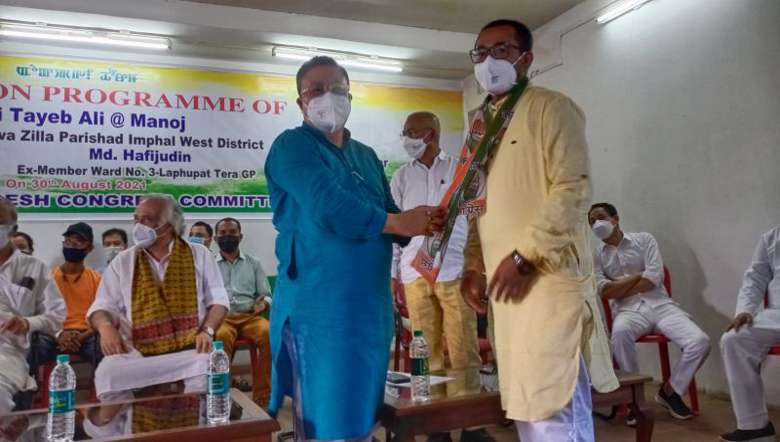 Only the Congress party can uplift the state, which has been down-falling since the inception of the BJP-led government in the state, said MLA K Meghachandra on Monday.

The MLA was addressing the gathering at the reception ceremony of Zilla Parishad member of 14-Uchiwa Haji Tayeb Ali alias Manoj, two other former members of Laphupat Tera GP and one former UP Pradhan by the Manipur Pradesh Congress Committee (MPCC) at its head office, BT Road, Imphal.

The two former members of Laphupat Tera GP are Md Themba and Md Hafijudin. The former UP Pradhan is Abdul Sattar.

Meghachandra alleged that during the four-and-half year rule of the BJP-led government in the state and seven years in the Centre, it has wreaked havoc and caused a lot of suffering to the general public.

Price hike of essential commodities, mismanagement of COVID-19, increase of unemployment rate are simple examples of havoc caused by the BJP, he added.

The MLA urged the gathering to support the Congress party in the upcoming Assembly election and make the state once again a secular one and prevent from further deterioration.

Interm MPCC president N Loken also alleged that the BJP-led government totally suppressed the rights to freedom of speech and expression guaranteed by the Indian Constitution.

Anyone who speaks against the BJP government are put behind bars, he said, adding that they spread fear among the general public to oppose the government.

Moreover the BJP government took up developmental works only on words. There action are totally different from their assurance and promises, he added.

The treatment of the minority communities by the BJP government is a clear example of supressing the public, he added.

Loken, however, assured the public that the upcoming Assembly election will see the end of the BJP's rule in the state.

Leaving the BJP and joining the Congress by such leaders clearly shows that people are losing faith and hope in the BJP. It is also a sign that the Congress will be forming the government soon, said All India Congress Committee (AICC) Manipur in-charge Bhakta Charan Das who also joined the reception ceremony. The function was also attended by former chief minister O Ibobi, AICC leader Jairam Ramesh and other Congress MLAs.