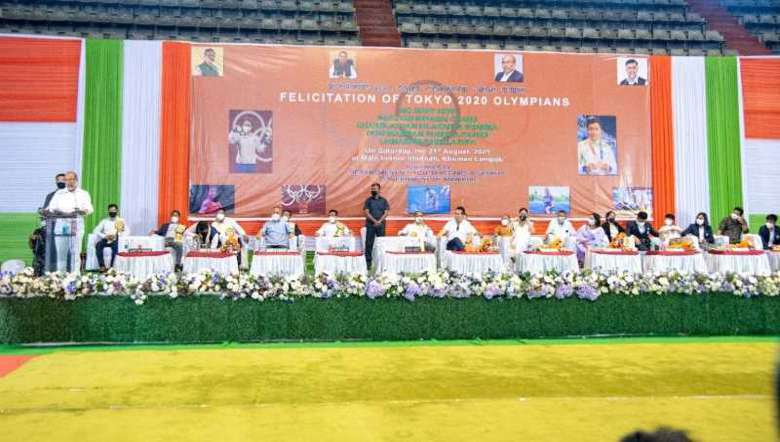 Manipur Chief Minister N Biren announced that Manipur Olympians' Park, which will be built at Sangaithel as a mark of honour to all the Olympians for their dedication and sacrifices, will be inaugurated by November.

Biren made the announcement during the felicitation programme of the five Olympians who represented India in Tokyo Olympics 2020. The Olympians, who were felicitated, included MC Mary Kom, Saikhom Mirabai Chanu, Shanglakpam Nilakanta Sharma, Pukhrambam Sushila Chanu and Likmabam Sushila.

The programme was organised by the Department of Youth Affairs and Sports at Main Indoor Stadium, Khuman Lampak on Saturday.

The architectural view has already been approved and the construction work will complete soon so as to inaugurate it by November this year, he added.

Biren further said that the state does not have enough resources but considering the potential of the state in sports, the government is putting whatever possible resources to develop the infrastructure of sports. The government is also planning to construct astro-turfs for hockey in most of the districts and few football astro-turfs have been constructed.

Under Khelo India Programme, each district of the state is going to develop infrastructure of any sports discipline which is apt to the district, he informed.

Concerning coaches to guide or mentor future players, he said that the state government will review the available number of coaches in the state. Without them, the state cannot produce talented players who can reach the Olympics.

The government will try to accommodate the former Olympians who are staying outside the state in the newly created 18 posts for Olympians in the department of YAS so that they could contribute in shaping future players, he added and extended warm wishes to all the Olympians for their future endeavours.

YAS minister, Letpao Haokip, who attended the function as president, said that the state has its own sports policy. The state government has created 18 new posts for sportspersons in the department of YAS. There are three posts of joint director, five posts for deputy director and 10 posts of assistant director. Besides this, there is five percent reservation for sports in recruitment of any job.

To develop grassroot level in sports with the main purpose to hunt talented sportsperson, a proposal that was sent to set up two playgrounds for each district was approved in-principle, he informed.

Stating about other plans, Letpao said that in collaboration with other northeastern states, the state is aiming to develop more sports infrastructure. He also suggested that the sports culture of the state would be enhanced if every department of state extended more support or financial assistance in promoting the sports.

While stating about Manipur’s limited resources that led them to face many challenges in taking up any steps, he urged all the Olympians to accept the recognition given to them gracefully. He also assured to extend all possible effort in developing sports in the state.

As a part of the programme, a two minute silence was observed for former Asian Gold Medalist boxer, Ngangom Dingku who passed away during the pandemic.

"Untimely demise of Dingku is great loss for Manipur. As an honour to the departed soul, we should observe condolence together once again,” said CM Biren.

A promotion letter was also handed over to Judoka, Likmabam Shusila Chanu, who has been promoted to sub-inspector from constable as a reward by the state government.

Cash reward of Rs 75 lakh was also given to Shanglakpam Nilakanta, and Rs 25 lakh each to P Shusila and Likmabam Shusila for participating in the Tokyo Olympics.