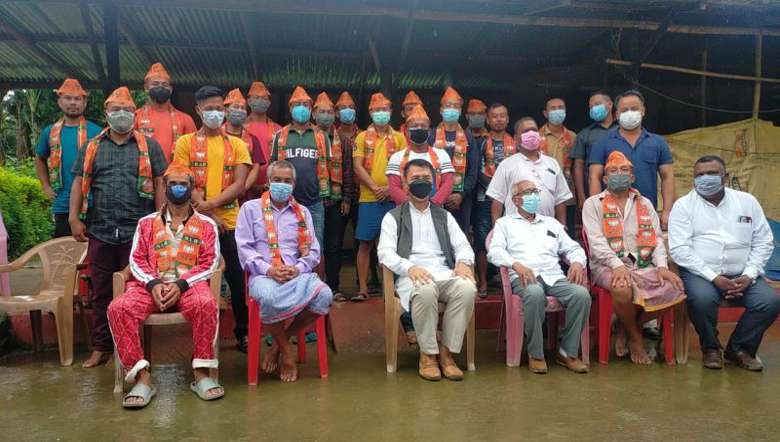 In a major setback for the Congress party in Heirok assembly constituency while the general election is knocking at the door, as many as 71 active Congress supporters left the party and joined BJP, thereby lending support to incumbent MLA Th Radheshyam.

MLA Radheshyam accorded a warm welcome to the newly inducted members with saffron coloured scarf and caps during a reception ceremony held on Friday.

Speaking at the occasion, MLA Radheshyam expressed his gratitude to the new BJP members and appealed for their full cooperation in taking up developmental activities.

While urging all the political workers to avoid enmity between one another during election time because of political differences, he exhorted the workers to help the poor and the weak instead. “Only then, love will be instilled in the society and ultimately make it a peaceful one,” he said.

MLA Radheshyam also promised that the Wangjing - Ningel road via Salungpham would be black topped soon.

He further appealed to the people to work with unity and proper planning about the developmental activities that may be taken up in the assembly constituency in the next five years.

“I, as a representative of the people, will make sure that their desires are materialised,” he assured.
BJP Heirok mandal president Th Chourjit, Heirok Jilla parishad member T Nungshi and polling committee presidents also attended the event.