The Manipur government reduced fish imports from 20 metric tons to 14 metric tons as a part of the government initiative to achieve self-sufficiency in fish production. 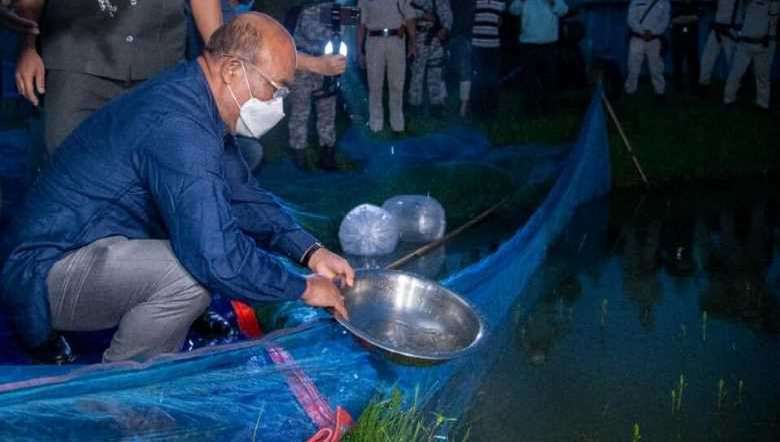 Manipur Chief Minister N Biren Singh on Thursday said the state government has saved over Rs 100 crore in fish import in the last four-and-half years. He said this was achieved after the state reduced its fish imports from 20 metric tons to 14 metric tons as a part of the government initiative to achieve self-sufficiency in fish production.

“It is very encouraging to learn that the imports of fish has reduced from 20MT to 14MT in the last four-and-half years, thereby saving over Rs 100 crore in fish imports from other states,” the chief minister said in a Facebook post.

Biren also stated that the state government has started an initiative for the revival of Sareng (Freshwater Catfish) production in the state. He stated this during the releasing of sareng fingerlings at the ponds located inside the premises of District Fishery Office, Imphal West, Lamphelpat on Thursday.

Biren said the state had procured around 2,000 Sareng fingerlings from different parts of the country and started rearing in ponds identified by the Fisheries department. He highlighted that such an initiative would reduce the demand gap of iced Sareng being imported outside the state. The government would be providing loans with 50 per cent grant to fish farmers who produce local Sareng, he added.

The chief minister further maintained the production capacity of fishes in the state had also increased from 30,000 MT to 36,000 MT per year now with the joint efforts of the government and the fish farmers. Around Rs 400 crore is being spent in importing fish outside the state, he added.

He recalled that the government had identified some sectors which needed prioritization in which fisheries was one of them. The government is also committed towards achieving self-sufficiency in fish production in the state, he added.

Biren appreciated the director and other officials of the Fisheries department for their hard work towards making the initiative successful. He also sought the support and cooperation of fish farmers of the state towards reviving local Sareng in the state.