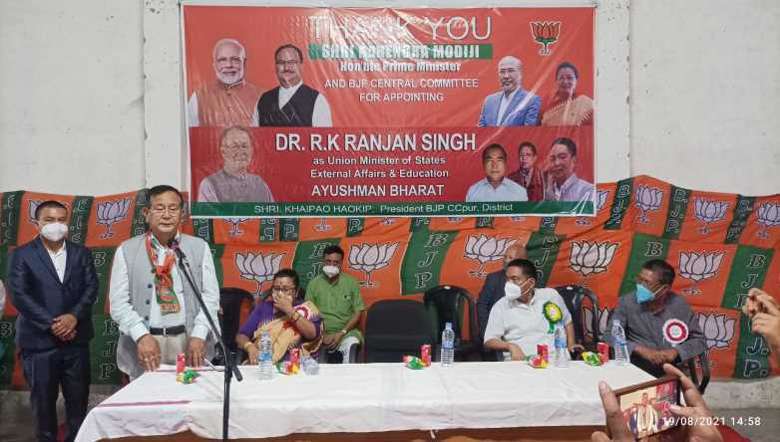 Union Minister of State External Affairs and Education RK Ranjan on Thursday said that efforts are being made to improve road connectivity and the education sector in Northeast states.

The minister was speaking at his felicitation programme organised in Churachandpur by the BJP Mahila Morcha, five mandals of BJP and frontal organisations, including Zomi Council, Kuki Inpi Churachandpur, Meetei Society and Hmar Inpui at New Bolzang community hall in the presence of TA and Hills Minister Vungzagin Valte; Singngat MLA and MTDC chairman Ginsuanhau Zou, Churachandpur district president Khaipau Haokip and others.

Ranjan, who was felicitated for becoming Union Minister of State, was accompanied by Manipur BJP president A Sharda Devi.

During the felicitation programme, Ranjan said that the BJP government is the only government that reaches out to people to have understanding and peaceful coexistence in the country. The philosophy of Prime Minister Narendra Modi is much needed in Northeast states which share boundaries with foreign countries like China, Myanmar, Bangladesh, Nepal and Bhutan. Moreover, talks are going on to improve the road connectivity and education sector in the region.

Ranjan also mentioned that within nine months, the BJP government has made the COVID-19 vaccine invented in India available to the public.

Minister Vungzagin said that he felt delighted to witness the warm welcome given to the union minister by the district with participation from leaders from five Mandals of BJP and frontal organisations. After a traditional welcome dance performance, MLA Ginsuanhau appreciated the participating team in welcoming the union minister with a slogan in local dialect - damsot hen Kalsizai.