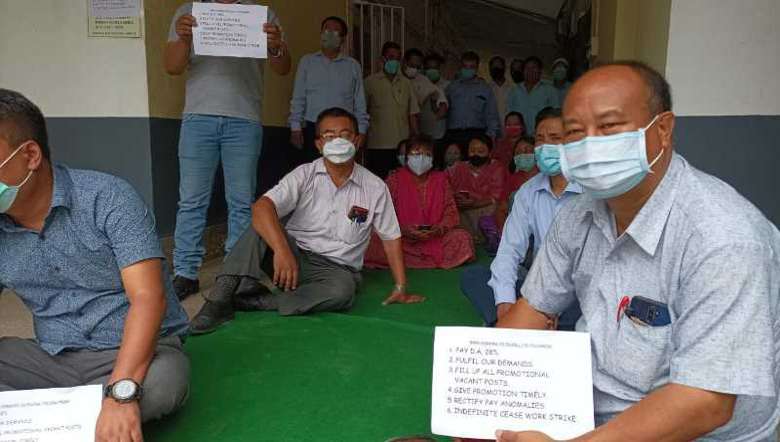 In continuation of the indefinite cease-work strike that was launched on Tuesday by Manipur secretariat employees’ associations under the umbrella of Manipur Secretariat Services Association (MSSA), the Manipur Government Services Federation (MGSF) including staffs of Health department and nurses, staged a sit-in-protest on Wednesday.

Speaking to the Imphal Free Press, MSSA general secretary Purujit Lairikyengbam said that the employees’ associations had signed various memorandums, however, the government has failed to materialise the agreements made. Various agreements regarding fulfilling the demands of employees had been signed with the then chief secretary but since then no positive steps have been taken, he added.

The employees have been demanding to fulfil the list of charter of demands for the last 4-5 years but instead of considering the demands, the government is giving priority to election strategy. If the employees have to continue in this situation then it will be hard to bring out any positive impact, said Purujit.

Responding to the media, he further said that if the government failed to fulfil the demands then intensified agitation will be started after discussing with the executive members of the employees’ association.

On the other hand, in connection with the launching of indefinite cease-work strike, state Home department has issued an order on the same day mentioning that any form of agitation which disrupts or dislocates the ‘essential services’ as outlined under section 2(a)(iii) of the Manipur Essential Services Maintenance Act, 1984 will have a serious adverse impact on the maintenance of public health especially during COVID-19 and would seriously endanger the life of public.

The government order signed by special secretary (Home), H Gyan Prakash, mentioned that the order was issued in response to the cease-work strike called by Manipur Government Services Federation and others including some staff of the state health department including nurses.

It further mentioned that it is necessary to prohibit the launching of any agitation or participation in any form of agitation by the staff of the health department in public interest.

Therefore, the governor of Manipur, in exercise of the power conferred under section 3(1) of the Manipur Essential Services Maintenance Act, 1984, is hereby pleased to order that any form of agitation including participation in the ‘cease-work strike’ disrupts or dislocates the functioning of the state health department services is prohibited with immediate effect.

It also mentioned that consequent upon the issue of the order under section 3(1) of the Act and in accordance with section 3(4), no person employed in any essential services to which the order relates to shall go or remain on strike.

Any strike declared or commenced, whether before or after the issue of the said order by persons employed in any such services shall be illegal. The order will remain in force for a period of six months from the date of issue of the order, it added.