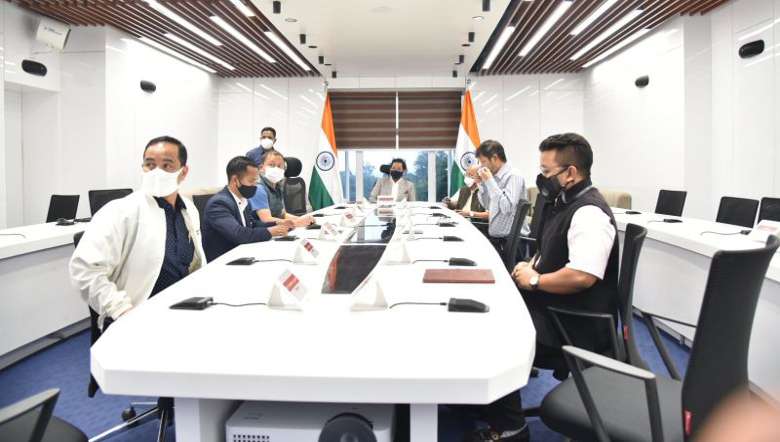 The Meghalaya Democratic Alliance government on Monday decided to institute a judicial probe into the killing of the former Hynniewtrep National Liberation Council (HNLC) leader Cheristerfield Thangkhiew, which led to law and order breakdown in the state capital.

“We have decided to institute a judicial inquiry under the Commission of Inquiry Act to look into the events that took place on August 13,” Chief Minister Conrad K Sangma told reporters after chairing a cabinet meeting to discuss the law and order situation in the state capital here on Monday.

This came a day after the funeral of the slain former militant leader, which was marked by violent protests as incidents of stone pelting and arson were reported.

A police vehicle (black Scorpio) belonging to Mawkynroh outpost was set ablaze at Jaiaw. Eye-witnesses informed that a group of youth snatched the weapon of police personnel and seized the vehicle and took it for a ride before setting it on fire at Jaiaw.

Thangkhiew was shot dead at his residence at Mawlai Kynton Massar on August 13 early morning.

Police had alleged that the former militant leader had attacked the police team with a knife when they tried to enter his house during an operation to arrest him for his involvement in the two IED blasts at Laitumkhrah on August 10 and Khliehriat police reserve on July 14.

The chief minister informed that the cabinet has also decided to set up a peace committee to be headed by the Deputy Chief Minister Prestone Tynsong and Cabinet Ministers Hamletson Dohling and Renikton Lyngdoh Tongkhar will be its members.

“This committee will also co-opt members from the civil society organisations, religious organisations, Synjuk Ki Rangbah Shnong and others,” he said.

Meanwhile, CM Sangma said the government has decided to extend the curfew till 5 am of Wednesday as well as the ban on mobile internet for another 24 hours keeping in mind the overall situation in Shillong.

The chief minister further informed he will be heading a sub-committee to look into the security, law and order where the deputy chief minister and the Home Minister Lahkmen Rymbui will also be part of it.

“This committee will also further look into the different aspects of law and order, future threats that there may be and at the same time look at the overall strengthening and overall functioning of the police,” he added.

Sangma said that the state government had sought five companies of paramilitary forces for tackling the law and order situation in the state.

“We have spoken to the Home secretary. I (also) had a detailed discussion with the Home Minister of India Amit Shah yesterday. We spoke on two occasions---one in the afternoon, one in the evening and on both occasions, he has assured us of full cooperation and support,” he said.