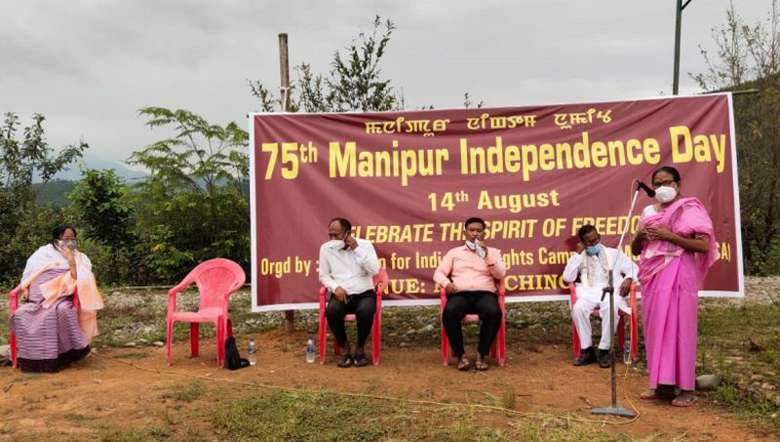 The programme was attended by representatives of various civil society organisations and student bodies.
Speaking on the occasion, Somorendro said that August 14 is an important day for Manipur as it is a day of celebration remembering Manipur’s independence against colonial rule. After the day of independence, Manipur State Constitution Act, 1947 was passed and under the Act, election was conducted for good governance. However, in 1949 the then king of Manipur, Maharaja Bodhachandra was forcibly signed to merge under the India government.

After the signing of the agreement with the India government on September 21, 1949, the separate political status of Manipur was lost, he added.

Before the British left India, an agreement was signed on August 11, 1947 between India government and Manipur government mentioning that under ‘Instrument of Defence’ apart from communication, external affairs other subjects including internal sovereignty will remain in the hands of the Manipur government. However, the Central government failed to honour the agreement till date, he added.

Somorendro said that with the sudden change in political status of 1947-49, the various issues of Manipur occurred. After Manipur was merged into India, the issues of influx of non-locals, weakening of indigenous political status, and creating divide and rule policy among the ethnic communities and violation of human rights was started.

According to the agreement signed between the Manipur and India government under ‘Instrument of Accession’ on August 11, 1949, Manipur needs to enjoy political autonomy. CIRCA has been demanding to readopt the political status of Manipur before pre-merger agreement, said Somorendro.

The day is usually celebrated across the state widely, however, concerning the situation of pandemic, it could not be done this year, he added.

He further appealed to the people to celebrate the Manipur Ningtam Numit widely in the state in the days to come.