President Ram Nath Kovind addressed the nation on the eve of the 75th Independence Day, 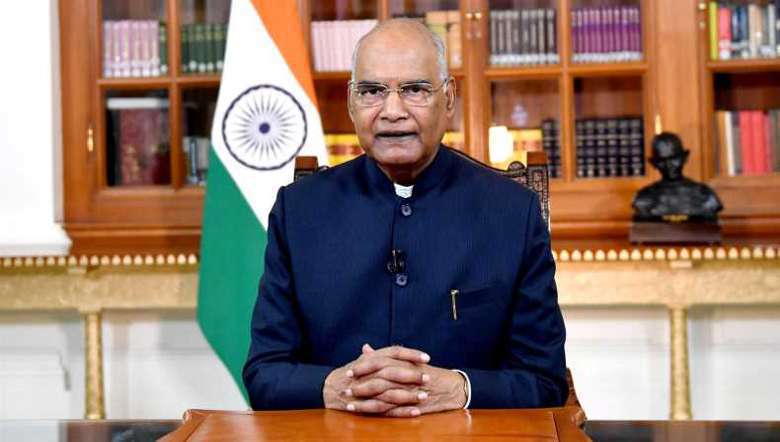 President Ram Nath Kovind, in his address to the nation on the eve of the 75th Independence Day, said that the scale of Independence Day celebration may have been reduced due to pandemic, yet the hearts of the nation remain always filled with enthusiasm.

The president pointed out that India’s success lies in the participation and achievements of Indian women in all walks of life and lauded India's highest number of medals in the 121 years of its participation in the Olympics. Our daughters have achieved world class excellence in playgrounds overcoming many adversities. Along with sports, epoch-making changes are taking place in the participation and success of women in all walks of life. From higher educational institutions to armed forces, from laboratories to playgrounds, our daughters are making their mark. In this success of our daughters, I see a glimpse of a developed India of the future. I urge every parent to learn from the families of such promising daughters and provide opportunities to their daughters also to explore avenues of growth,” the president said.

The president also reminded the nation that though the intensity of the pandemic has eased, the country is yet to come out of the devastating effects of its recurrence.

“Last year, with exceptional efforts from all, we had succeeded in bringing the spread of infections under control. Our scientists had succeeded in developing vaccines in a very short time. Therefore, at the beginning of this year, there was every reason to be hopeful as we launched the largest vaccination exercise in history. Yet, due to the new variants and other unexpected factors, we suffered from a terrible second wave. I am deeply sad that many lives could not be saved and many more suffered immensely in this phase of an unprecedented crisis. I speak for the whole nation when I say that I share the grief of all the affected families with the same intensity,” Kovind said.

The president mentioned how the frontline workers risked everything to contain the impact of the second wave. He also said that the government’s endeavours were supplemented by initiatives of the states, private sector healthcare facilities, the civil society and others.

“In this extraordinary mission, foreign nations shared the essentials generously, just as India had reached out to many nations with medicine, equipment and vaccines. I am grateful to the global fraternity that came forward with a helping hand,” he said.

Pointing out that vaccines are the best possible protection, he urged all eligible citizens who are yet to get vaccinated to do so at the earliest and inspire others.

On the economic impact of the pandemic, the government had taken a series of relief measures for the most affected last year, he said.

“This year also, the government had distributed food grains to about 80 crore people in May and June. This benefit has been extended till Diwali. Moreover, the government has announced a new stimulus package worth Rs 6 lakh to 28 thousand crore to boost the selected Covid-affected sectors. In particular, it is heartening to note that an amount of Rs 23 thousand 220 crore is being spent over one year for expansion of medical facilities,” he said.

Dwelling on the agriculture sector, he said, “The psychological distance between the urban and the rural is now much less as compared to the past. After all, India lives in its villages which cannot be allowed to lag behind in development. That is why special campaigns, including the Pradhan Mantri Kisan Samman Nidhi, are being implemented for the welfare of our farmers”. These efforts are consistent with the vision of an Atma Nirbhar Bharat, a self-reliant India, he added.

“Special emphasis is being given to public welfare. For example, the dream of having a home of one’s own is being realised, thanks to the Rs 70,000 crore credit-linked subsidy scheme. The series of agricultural marketing reforms will empower our ‘annadata’ farmers and help them get better price for their produce,” the president said.

“With all-round progress, India’s stature is rising in the international arena, as it was reflected in our participation in several key multilateral forums as well as in consolidating bilateral relationships with several countries,” he added.

Also, stressing that Parliament is the temple of democracy which provides the nation with the highest forum of discussion, debate and decision making for the well-being of the people, he said, “It is a matter of great pride for all Indians that our Parliament will soon be housed in a new building… and will be inaugurated in the year of the 75th anniversary of Independence”.

Speaking about the Gaganyaan mission, the president said, “Pilots of the Indian Air Force have been receiving training abroad.  When they fly off into space, India will become only the fourth nation on the planet to carry out a manned space mission. When it comes to the flights of our ambitions, we don’t let any limitations define us”.

Calling upon the nation to strive for “more equality in an unequal world, more justice in unjust circumstances,” he said, “In the spirit of unity in diversity, we as a nation are following the right course…  This vision derived from the unique Indian heritage is going to be helpful not only to us but to the whole world in this century”.

“India is proud of not only adhering to the Paris climate agreement but doing more than what the country has committed to protect the climate. However, the world desperately needs a course correction,” he said.

The president pointed out that the spirit of patriotism and sacrifice was paramount among our freedom fighters. They faced all kinds of challenges without caring for their own interests. … All of us should imbibe this motto as a mantra and work with full devotion and dedication for the development of the nation, he said.

The president also extended his greetings to the members of the armed forces, who have guarded our freedom, valiantly and gladly making supreme sacrifice when necessary. “I also extend my greetings to the members of the Indian diaspora, who have represented the motherland well wherever they have made home… I once again congratulate all of you, on the eve of India’s 75th Independence Day. While celebrating this anniversary, I cannot stop my mind from imagining a powerful, prosperous and peaceful India of 2047 when we will celebrate 100 years of our independence,” the president added.