Chief of Chikim village, Jamkhogin Haokip alleged that personnel of 20 Assam Rifles damaged his car at Tengnoupal checkpoint on August 12. 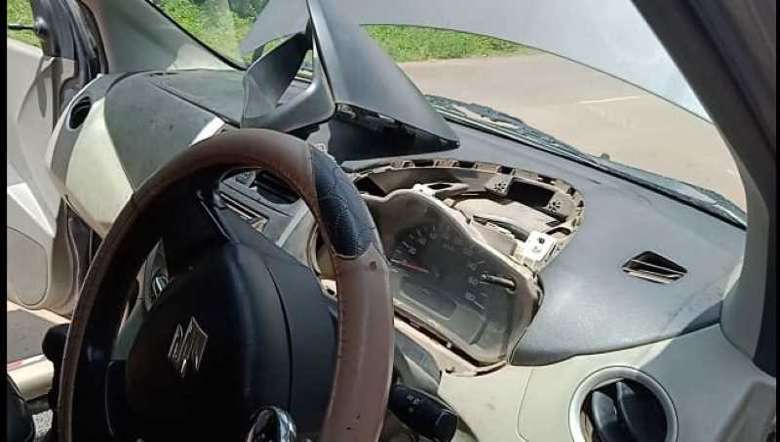 Chief of Chikim village, Jamkhogin Haokip alleged that personnel of 20 Assam Rifles damaged his car at Tengnoupal checkpoint on August 12.

Speaking to media persons at his residence, Jamkhogin said that on August 12, his nephew Paoginthang Haokip drove his car to Imphal carrying Rs 4 lakh to buy a car. When he reached Khudengthabi AR check point, the AR personnel on duty detained Paoginthang and told him that he cannot carry Rs 4 lakh as no one is allowed to carry more than Rs 2 lakh in cash. The AR personnel did not allow him to pass the check gate even after he told them that the money was for buying a vehicle at Imphal.

Leaving with no choice, Paoginthang handed over the cash amount of Rs 2 lakh to one of his friends and then he crossed the Khudengthabi check gate, he added. But when he reached Tengnoupal AR checkpoint, he was signaled to park his vehicle and few AR personnel started checking his vehicle. Even after checking for hours, the AR personnel did not find any illegal items from the vehicle, however, the vehicle was damaged in AR action. Dejected with the damage done to the vehicle, Paoginthang returned home without proceeding towards Imphal, said Jamkhogin.

“I strongly denounce the action of 20 AR Tengnoupal and demand the AR to repair the damage made to my car at the earliest. If they do not repair the car, I will put up the matter to Kuki Chiefs Association and file an FIR against the concerned AR,” said the village chief.

He further said that he did not object to checking of the vehicle by AR personnel at checkpoints but they should perform their duty in a professional way. Such unprofessional and senseless act should not be condoned.