Children from poor families and vulnerable social groups have been the worst affected by this pandemic-led disruption--they have been the least able to access online education . 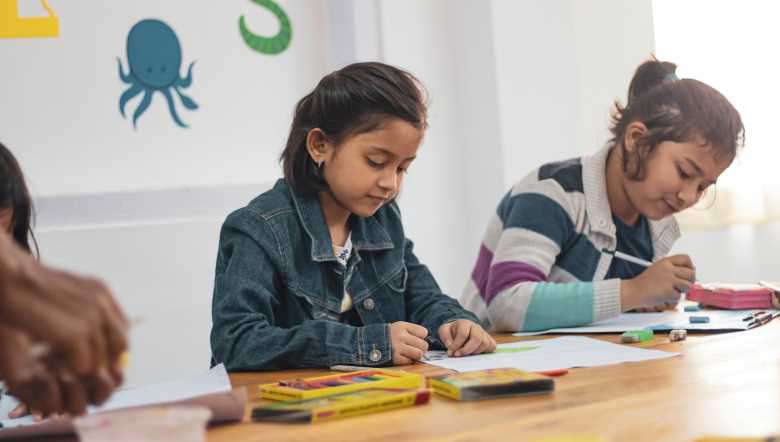 "I am worried about his future," Bajrang Saini said of his 12 year-old son, Dheeraj Saini, who attends a private school about 40 km from Jaipur city under the Right to Education Act. "I just want my son to be independent when he grows up." With his father using the only smartphone at home, Dheeraj is unable to access online lessons.

Across India, most children from pre-primary to grade VIII have not attended school since India went under lockdown on March 24, 2020, to curb the spread of Covid-19. Some states have reopened schools more recently--Madhya Pradesh for grades IX to XII since July 26, with 50% attendance; Punjab since August 2 for all grades; and Uttar Pradesh for grades IX to XII from August 16, operating at 50% capacity.

Children from poor families and vulnerable social groups have been the worst affected by this pandemic-led disruption--they have been the least able to access online education or get parental help in learning, parents and teachers across government and small private schools in one Rajasthan district told IndiaSpend. Nearly 15% of Rajasthan's population or 10 million people live below the poverty line, data from 2011-12 show.

The long separation from schools and regular lessons will worsen an already dire situation: In 2019, 16% of grade I students in rural schools could read a grade I-level text, and only 74% could even recognise numbers. In addition, children now have underdeveloped social skills and few friendships outside their homes, teachers and families said. This could have long-term impacts for the majority of India's 264 million school children and its demographic dividend--the growth opportunity from its large working population in the future.

This story is the first in our new series, 'Education Disrupted', which will focus on the pandemic's impact on children, the effect of school closures, and whether, how and when schools should reopen.

'She doesn't understand what she is doing'

Classrooms and grounds lie empty in Jaipur district's schools, urban and rural. Many private schools are almost completely shut but government schools remain open until 1 p.m. and their teachers come to school to file away the assignments submitted by students. Once a week teachers also visit children who are unable to access online classes, they said. Some days, children--usually the older ones--come to school to collect books, clarify doubts about lessons or submit homework.

Online tools are either out of the children's reach and those who have digital gadgets often struggle to comprehend the videos and documents sent over the phone, we found.

"I am struggling to teach her at home. I have studied until grade VIII in a Hindi-medium school and the 'hi-fi' English in her school is difficult to keep up with," said Manju Harijan, the mother of Radhika Harijan, a grade V student in a private school near Harota village. Radhika gets assignments on a smartphone and her mother dutifully sits with her and ensures that she completes them. "But I do not think she can understand much of what she is doing," the mother said.

Parents who have not studied in school find it hard to teach their children. One third of Rajasthan's population is illiterate, data from Census 2011 show.

The state administration sends videos and pdf documents every day and these are forwarded to students by teachers over WhatsApp. Every Friday, there is a quiz on that week's work sent to students and it is mandatory to finish this. Teachers in a government primary and upper primary school in urban Jaipur often call the children to school one-by-one, show them the quiz on their phones and get it completed, they said.

"The work that is happening online, neither the children nor we are happy with it. The best way to teach children is in school," said Khemchand Tanwer, the principal of a government school in Govindgarh. "Children who come from very poor families either do not have smartphones or it is with the father or an older brother who take it with them when they go out to work."

Across schools in rural India, 61.8% of families owned a smartphone, found a 2020 Annual Status of Education Report(ASER) by the education nonprofit Pratham. The proportion was much higher in private schools where nearly three-quarters had a phone, compared to 56% of government school students. Several surveys show that children were unable to access learning digitally and teachers were frustrated with the medium.

"When children would come to school, they would also run and play around in the yard. They would meet one another, learn from one another," said Kripa Gupta, a primary school teacher in a government school in urban Jaipur. This disruption means that children not only miss classes but also physical activity and the development of social skills, teachers said. "When we visit, we find that some of the students are looking thinner--at least in the school they got a hot nutritious meal," Kripa added.

Children also miss the camaraderie in schools. Anita Yadav, 15, a private school student, in Jaitpura village, said she missed her three best friends Rashmi, Geetika and Zoya, whom she had not met in months. The four of them stay in touch over the phone and discuss what they study, cook and eat.

A study in Bihar showed that 87% of adolescent girls needed mental health counselling and felt the need to talk to somebody, said Poonam Muttreja, executive director of the Population Foundation of India, in an IndiaSpend interview published on July 30.

Government school teachers in Rajasthan have been instructed to visit children, especially those who have trouble with digital learning, as we said. This connection will be key to ensuring that students return to schools when they re-open, experts have said.

"We visit Khushi and her brother Kartik every Monday," said Saroj Meena, Khushi Harijan's grade II class teacher in Harota village in Jaipur district. Khushi, who belongs to the scheduled castes, is unable to cope up with work on her father's mobile phone and her mother is unequipped to teach her as she dropped out of school in grade I. "I sit with her and try to explain as much as I can," Meena said. "It is not the same as in school but we are at least connected with the children and their families."

Other than teacher visits, schools also stay in touch with students when they distribute food rations in lieu of midday meals to families of enrolled children, we found.

Unlike government schools, private schools--especially those that charge a low fee--have been largely out of touch with younger students. Older ones in some schools follow online lessons while others still visit school to seek answers to queries because they do not have personal gadgets, our reporting showed.

Red Fort International School, a low-cost private institution in Renwal, which has children from semi-urban and rural families, has been unable to retain its teachers because parents stopped paying fees once schools shut, said owner and manager Ravi Saini. "We do not have online education for primary school children," he said. The school charges between Rs 5,000 and Rs 13,000 a year depending on the grade. "If a parent has a problem affording the fee, we sometimes lower it or give them more time to get the fee money together," Saini said.

About 37% of India's school students study in the country's 337,499 private schools, show 2019-20 government data. In private schools unaided by the government, households spend an average of Rs 10,623 per student per year at the primary level in rural areas, and Rs 19,315 in urban areas, per a 2018 report on consumption by the government's National Sample Survey Organisation, we reported in December 2020.

A larger proportion of children were not enrolled in school in 2020 when compared to the survey in 2018, found the ASER 2020 survey.

"I have not yet admitted my younger child to school because we do not even know when schools will start. I do not think any private school is even enrolling students currently," said Kaju Yadav, who has a six year-old son, Daksh Yadav. "When I last called the school, they said they were completely shut." Most students between the ages of six and 10 years who had not enrolled in school were still waiting for admission, the ASER survey found.

Experts predict a drop in private school enrollments next school year and a rise in demand for government school seats because family incomes have been impacted by the pandemic-led economic crisis, we reported in December 2020.

For instance, the New Shine International School in Harota has had about 55-60 admissions this year compared to the over 100 it reports in a normal year, said the private school's principal, Satya Narayan Sharma.

Fear of a third wave

Vijayshree Saini loves going to school. "She does not want to stay at home," said her mother Suman. Even though schools are shut for students, she is at the school on July 28 in her school uniform to pick up new books for grade V. She enrolled at a government school, after leaving a private school in March 2020.

We also found that rural-urban and economic factors decide how willing parents are to send their children to school. In villages, every parent we interviewed is keen for schools to reopen but teachers in cities complained that attendance was as low as 50% when schools briefly opened grades IX and above in January-February. "With talk that the third wave will impact children more, parents are worried," said teachers at the government school in urban Jaipur.

Parents who want schools to reopen at the earliest possible are mostly those who need to go to work and cannot teach or look after their children during working hours, said teachers. The reluctance to send children to school comes from parents who can teach them at home.

School administrators argued that the continued closure of schools makes no sense given the removal of restrictions elsewhere. "Are markets not crowded? Why does the government not trust us? Can we not make arrangements for the safety of children?" asked Ravi Saini, who runs the private school in Renwal.

School principals and teachers suggested running schools in shifts with fewer students and calling every grade only twice a week apart from ensuring adherence to usual Covid-19 protocols on hygiene and social behaviour. But in many situations this is easier said than done, we found. Take for instance, one of the primary schools in Govindgarh which does not have running water. Children who study here have to fetch it from the tank in the school compound. "Sometimes even before you notice it, they would have shared their water bottle," said Sunita (she gave us only one name), a teacher in an urban government school.

Writer and editor at IndiaSpend, Shreya Khaitan is a graduate of Global Human Development program at Georgetown University, Washington DC and has worked with The Wall Street Journal, Mumbai.