That enigmatic smile of JP Nadda

IFP Editorial: Joining the BJP, Govindas along with Sambit Patra and Biren called on Nadda. But, there were tell-tale signs of dejection and disappointment in the official photograph released after the meet. 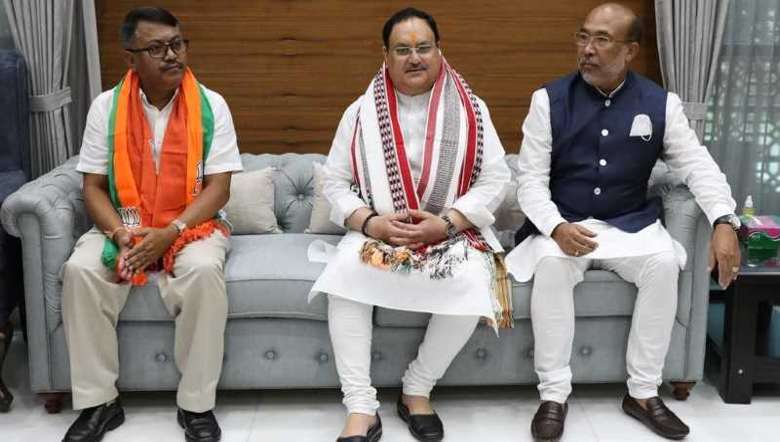 N Biren Singh joined the Bharatiya Janata Party (BJP) after resigning from the Congress and MLA, five months prior to the 2017 state assembly elections and went on to become the first BJP chief minister of the Manipur.

Although the BJP won only 22 seats as against 28 of the Congress, it somehow managed to cobble together an alliance with the National People’s Party (NPP) and the Naga People’s Front (NPF) besides the support of one seat parties and an independent.

With the defeat of former BJP president Th Chaoba and another veteran Y Irabot in the 2017 elections, Biren became the natural choice of the chief ministerial post as he had the most experience among the elected BJP legislators.

Like Biren, Govindas Konthoujam first resigned from being the Manipur Pradesh Congress Committee (MPCC) president and later from the Congress and the state assembly to join the BJP on August 1, seven months prior to the 2022 state assembly elections.

Govindas was much senior to Biren as he was first elected as an MLA in 1995 and went on to hold the Bishnupur seat for a total of six consecutive terms. But for a brief stint with the breakaway Manipur State Congress Party, he had always been with the Congress party.

Biren’s resignation from the Congress came after leading a dissident group of MLAs against former chief minister Okram Ibobi Singh for months.

Taking on Ibobi was seen as a courageous move for a comparatively young leader like him. His comrade-in-arms then was K Ranjit of Sugnu constituency. They were also the two most trusted lieutenants of O Ibobi during the Congress regime and in fact the Ibobi-led Congress government in its second innings was popularly known as IRB government meaning the triumvirate ‘Ibobi-Ranjit-Biren’. They were the night owls who like to supervise construction activities first hand at the spot on the road-side.

Engineers and contractors had a hard time during those hey-days in trying to please the road bosses.

When both did not find a berth in the third term of Okram Ibobi government, they led the dissident charge against Ibobi. As Biren switched sides, Ranjit remained with the Congress. Although unsuccessful, the attempt to throw out Ibobi made him politically stronger as he was seen as a leader with substantial following even among the MLAs and as a potential leader of the state.

In fact, roping in Biren was BJP’s replication of its Assam formula, where it inducted dissident Congress leaders like Himanta Biswa Sarma and thus gained power in the state.

Govindas Konthoujam was altogether another breed of politician. He never did openly revolted against the leadership of Okram Ibobi Singh, though he was the prime mover behind the scenes as he had the clout and finance. Yet, the difference between Biren and Govindas is that the latter continued in the ministry for the third term while Biren and Ranjit was dropped. Okram Ibobi, powerful as he is, could not afford to shake off Govindas.

So then, Govindas was quite a catch for the BJP being a six-time MLA and state Congress chief in the run-up to the 2022 assembly elections. But somehow, it turned out to be a disappointment for Govindas as he joined the BJP on August 1.

According to expectations, he was supposed to join the BJP in the august presence of party president JP Nadda himself at the BJP party headquarters and he had been waiting for that grand moment, but had to contend with the Manipur in charge Prabhari Sambit Patra in the ceremony. He was aspiring for the CM post himself in the 2022 elections. Of course, he along with Sambit Patra and Biren called on Nadda at his official residence after the ceremony. But, there were tell-tale signs of dejection and disappointment in the official photograph released after the meet. Posing for the lens with JP Nadda in a single sofa, both Govindas and Biren were smug-faced while the BJP president wore an enigmatic Monalisa-like smile.

Govindas seemed to have chosen the organisational route through the RSS to join the BJP. Now, it remains to be seen whether the RSS design had the support of the supreme leaders Narendra Modi and Amit Shah.