The fresh border tension between Assam and Mizoram prompted both chief ministers of the two states – Assam’s Himanta Biswa Sarma and Mizoram’s Zoramthanga – to seek the intervention of Union Home Minister Amit Shah. 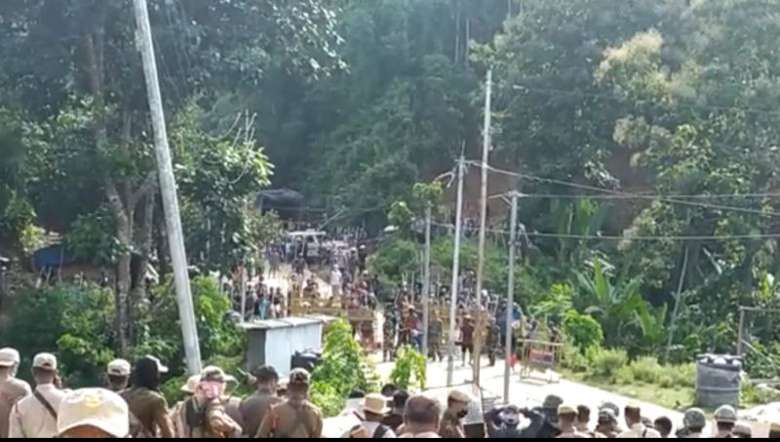 Fresh violence erupted at the Assam-Mizoram border on Monday, leaving at least six Assam Police personnel dead and several others injured in the clash along the border in Assam’s Cachar district.

Extending his condolences over the loss of lives in the border clash, Assam Chief Minister Himanta Biswa Sarma tweeted, "I am deeply pained to inform that six brave jawans of @assampolice have sacrificed their lives while defending constitutional boundary of our state at the Assam-Mizoram border. My heartfelt condolences to the bereaved families."

The fresh border tension between Assam and Mizoram prompted both chief ministers of the two states –  Assam’s Himanta Biswa Sarma and Mizoram’s Zoramthanga – to seek the intervention of Union Home Minister Amit Shah.

Shah dialled the two CMs and asked them to resolve the border issue, following which both CMs have agreed to resolve the matter and maintain peace, reports said.

On Monday, both CMs were engaged in exchange of barbs on Twitter.

Earlier in the day, Mizoram Chief Minister Zoramthanga tweeted a video of a scuffle between security forces and the Assam police at the Assam-Mizoram border. The Mizoram chief minister tagged the Union Home Minister Amit Shah to look into the matter.

"Shri @AmitShah ji.kindly look into the matter. This needs to be stopped right now," the Mizoram CM tweeted with a video of a mob clashing with the police.

In another tweet, Mizoram CM Zoramthanga posted another video stating that a  couple on their way back to Mizoram via Cachar were manhandled and ransacked by thugs and goons.

"Innocent couple on their way back to Mizoram via Cachar manhandled and ransacked by thugs and goons. How are you going to justify these violent acts?," Zoramthanga tweeted.

To this, Assam Chief Minister Himanta Biswa Sarma replied, “Kolasib ( Mizoram) SP is asking us to withdraw from our post until then their civilians won't listen nor stop violence. How can we run government in such circumstances? Hope you will intervene at earliest @AmitShah @PMOIndia.”

Later, the Assam CM tweeted that he had spoken to CM Zoramthanga and reiterated that "Assam will maintain status quo and peace between the borders of our state."

"I have just spoken to Hon’ble Chief Minister @ZoramthangaCM ji. I have reiterated that Assam will maintain status quo and peace between the borders of our state. I have expressed my willingness to visit Aizawl and discuss these issues if need be," Sarma wrote.

To this Zoramthanga replied, “Hon'ble @himantabiswa ji, as discussed I kindly urge that Assam Police @assampolice be instructed to withdraw from Vairengte for the safety of civilians."

Mizoram Home Minister Pu Lalchamliana had repeated the sequence of events along the Assam-Mizoram border on Monday and condemned the unjustified act of intrusion and aggression of the Assam government into the territory of Mizoram.

"Around 200 Assam armed Police led by IGP, Assam Police accompanied by DC, Cachar, SP, Cachar and DFO, Cachar came to Vairengte Auto-rickshaw stand at around 11.30 am on Monday. They forcibly crossed the duty post manned by CRPF personnel stationed there and overran a duty post manned by one section of Mizoram police personnel. The Assam Police also damaged several vehicles that were travelling along the National Highway between Vairengte and Lailapur,"  the Mizoram home minister said in a statement.

"Unarmed civilians were assaulted by Assam Police by lathi charging them and firing tear gas, thereby causing injuries to several civilians. SP, Kolasib and an Executive Magistrate went to meet them and try to resolve the issue. However, the Assam side was adamant and unwilling to discuss the issue.The confrontation continued and a volley of tear gas canisters and grenades were launched at Mizoram Police followed by firing from Assam side at around 4:50 p.m,"  Lalchamliana stated.

Terming the entire development "unfortunate", Lalchamliana stated that it all started with the Assam Police aggression into the duty camps of CRPF and Mizoram Police near Vairengte Auto-Rickshaw stand.

"With the intervention of the Hon'ble Union Home Minister who spoke to both the Chief Ministers, Assam Police have withdrawn from the place and the duty post has been handed back to CRPF personnel," Lalchamliana added.