Henkai Singsit said that he was detained on June 24 and then thrown into Sajiwa Jail after four days of detention on July 29 on the grounds and reasons he has not been told till date. 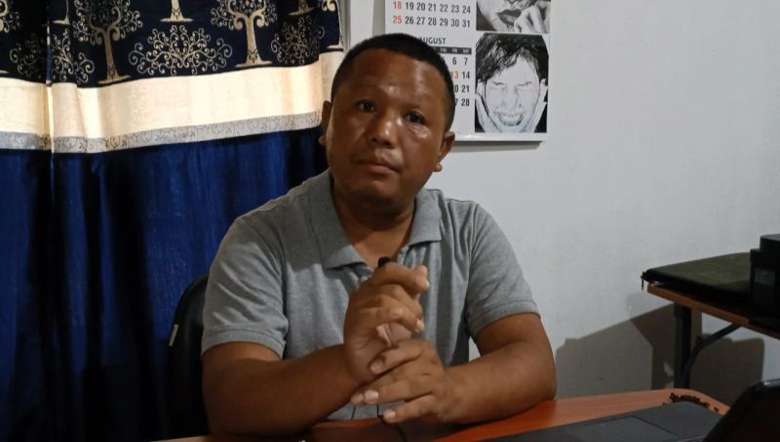 After his release from jail on Tuesday, former ATSUM finance secretary Henkai Singsit explained why he had dubbed Chief Minister N Biren Singh as ‘Judas Iscariot’ on his Facebook page which landed him in Sajiwa jail for a month.

Speaking to the media at his Motbung residence, Henkai Singsit said that he was detained on June 24 and then thrown into Sajiwa Jail after four days of detention on July 29 on the grounds and reasons he has not been told till date.

“I was freed yesterday, after going through traumatic times because of the extra-constitutional arrests while my family members had to go through immense suffering and hardships as well,” he said.

Father of two newly born twins while he was in jail, Henkai said he had spoken out against the chief minister of Manipur “for betraying the trust of the tribal people since September 27, 2017,” wherein a charter of demand was submitted to the government of Manipur through former chief secretary Suresh Babu which was a comprehensive memorandum identifying the problems and plights of the hill people.

The government had acknowledged the genuineness of the demands but unfortunately, nothing has been done to translate them into reality even after innumerable talks with the government even with the participation of the chief minister himself, Ministers, and department officials, he said. “Four years have passed yet nothing is seen on the ground,” he added.

He said that his expression or public utterance was made within the ambit of the constitution of India and as a free citizen of a free nation and with the intention to remind this government of the promises they have made to the hill people. “I have not said anything which is detrimental to the sovereignty and territorial integrity of this country nor have I done anything that is prejudicial to the defence of this country or subvert our relations with any foreign country,” he added.

"I have not said anything to incite public hatred, nor spoken out against any religion. Neither, have I committed any crime to warrant this outrageous arrest and humiliation,” he asserted.

He also wondered why the state government is “so much allergic or apprehensive to public criticism and expression of one’s opinion and views in matters of governance.”

He continued that one fails to understand why the present government is trying to stifle the voices of dissatisfaction and taking innocuous statements on social media so seriously as criticism and dissent is a part and parcel of liberal democracy and is needed for a healthy democracy.

“If the government is so much allergic to criticism, why not come up with an amendment through constitutional processes and remove the right to freedom of speech and expression, after all, the BJP has got the brute majority in the parliament house,” he added.

“People are angry with the government for its autocratic nature and vindictiveness. They are being arbitrarily arrested, humiliated and thrown to prisons for petty offences which could have been either ignored or let-off after chastening and chastising them and with stern warning that they will be punished in the event of repetition,” he added.

While reminding the state government that it is the people who have catapulted them to power, Henkai Singsit said that the present government should take it to heart that the election is around the corner and that the same people will teach them a lesson if they do not mend their ways.

The former ATSUM finance secretary pointed out that there are 35 colleges in Manipur, viz. 26 in the valley and only nine in the hills while adding that three hill districts are without a college whereas every valley district has at least 5-6 colleges.

He said that the demand for upgradation of more high schools to higher secondary is a non-starter till date while there is not a single Government Hr Sec School from Motbung to Mao, a distance of around 80 Kms.

The recruitment of 42 MIL lecturers and 688 lecturers for higher secondary schools notification was issued on July 6, 2018, for which the appointment orders of 688 lecturers were issued on November 25, 2019 but MIL recruitment process is stalled till today for unknown reasons, he said.

He also pointed out that in connection with upgradation of IGNTU to a full-fledged autonomous university, chief minister N Biren Singh had promised to take along ATSUM team to meet the former HRD Minister, Prakash Javedkar but fail to fulfill it.

He said that with regards to appointment in six ADC’s, notification was issued on February 29, 2020 but no groundwork has been done till date.

He further pointed out that the election of ADCs which was to be held on June 1, 2020 had not been done so far after innumerable MOU were signed for its conduct. Even ATSUM had called a bandh on March 13, 2021 and imposed office picketing on April 5 and 6, 2021. He said that delimitation of Manipur Assembly Constituencies, 2020 is still at a blur.