Owing to the fuel price hike, many farmers could not carry out their agricultural activities due to their inability to afford the pumping of water into their paddy fields, Manipur Pradesh Youth Congress P Bankimchandra Meitei said. 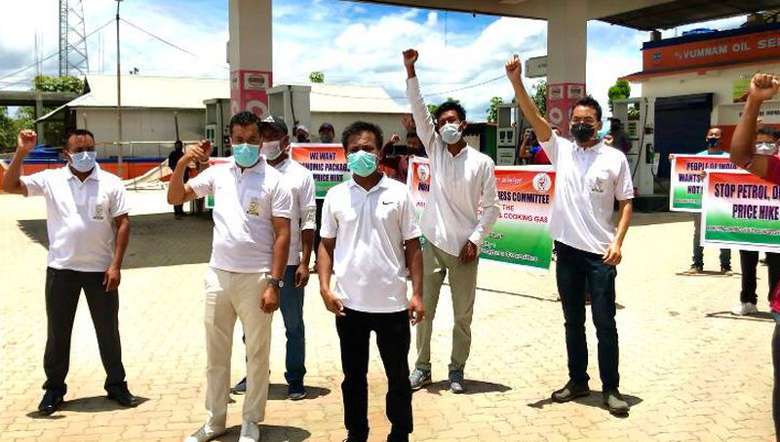 Kakching District Youth Congress on Tuesday drew attention of the Manipur government to cut down taxes imposed on fuel considering the untold miseries faced by the poverty stricken people of the state.

The demand was raised during a rally held at Wabagai and Hiyanglam Oil Pumps, condemning the continuous rise in prices of petrol, diesel and cooking gas.

Addressing the media at the sidelines of the protest, state general secretary, Manipur Pradesh Youth Congress P Bankimchandra Meitei who is also in charge of Kakching District Youth Congress, said that the country has been reeling with COVID-19 pandemic which has affected every section of society. Amid these situations, the present Modi-led government is constantly increasing prices of petrol, diesel and cooking gases on the grounds of needing more funds to fight the pandemic.

Such stance of Modi government is highly condemnable as increasing prices of those items results in price hike of all other basic requirements, he said. Such price hike is almost similar to looting the public, he stated while informing that prices of petrol has reached around Rs 105, while diesel costs nearly Rs 90 and cooking gas to around Rs 1,000 from Rs 700-750.

Bankim said that the maximum population of the state depends on the agricultural sector. Owing to the fuel price hike, many farmers could not carry out their agricultural activities due to their inability to afford the pumping of water into their paddy fields.

Despite the price hike, many other states still try to control prices of essential commodities for the welfare of people. The state government of Manipur should also take up some steps to reduce the prices at least to some extent in the interest of the people of the state, he added.

Slogans such as ‘stop petrol, diesel price hike’, ‘we want economic packages not price hike’ etc. were raised during the protest.