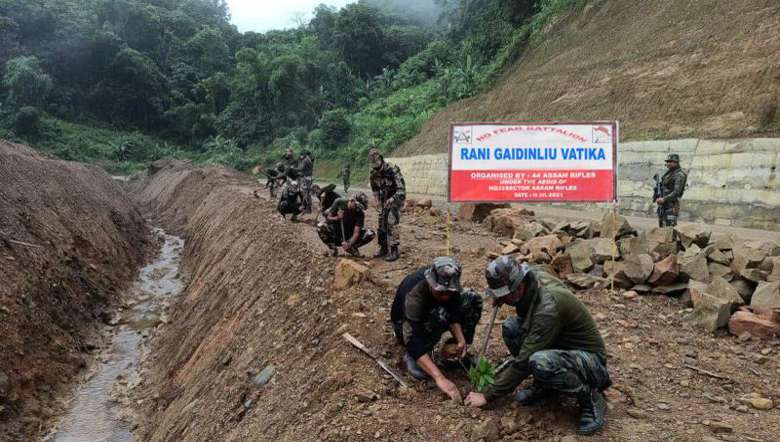 In its week-long Van Mahotsav celebration, 44 Assam Rifles under the aegis of 22 Sector of Assam Rifles IGAR (E) planted approximately 5,000 Hibiscus and Bougainvillea saplings along a stretch of some seven kilometres on Khongsang-Tamenglong road on Saturday.

44 Assam Rifles Adjutant said that the stretch has been also named as Rani Gaidinliu Vatika in honour of the great daughter of the soil.

He said that she was a great freedom fighter hailing from Nungkao village in Tamenglong and she dedicated her complete life for the social upliftment of its people.

“A Padma Bhushan awardee, she gave her people a sense of identity and left a legacy, a memory that the region had produced one of the most courageous women freedom fighters. This vatika shall act as another feather in the cap of locals from the Zeliad region,” he said.

He further said the people of Tamenglong have taken another step to fulfil its commitment of a clean, green and sustainable environment. During the week-long Van Mahotsav, various government departments, civil bodies and locals along with 44 Assam Rifles have come forward and contributed their bit in enhancing the green footprint by organising various plantation drives across the district.

In the series of plantation drives being organised by the 44 Battalion, troops from town and Akhui planted saplings of Hibiscus and colourful Bougainvillea along the under construction highway from “Km 05” to Akhui, he said.

He said that these saplings would start blooming by next monsoon season. They will also reduce the soil erosion along the road and will enhance the life of the newly constructed highway.

"These saplings along the road would supplement the greenery and would also negate the ill effects of deforestation which is part of the infrastructure development process in the region,” he added.