Manipur Chief Minister N Biren on Friday announced that every household in the state will be tested for COVID-19. 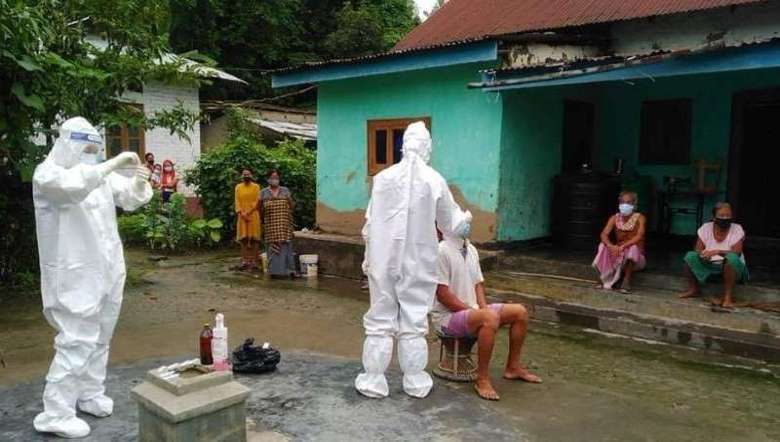 The Manipur Health Service on Saturday started house-to-house testing for Coronavirus infection in several districts in the state in an effort to control the rise in COVID-19 cases in the state.

In a series of tweets, Chief Minister N Biren Singh said that house-to-house testing for COVID-19 has started in Imphal West and Imphal East on Friday along with mass vaccination drive at constituency level across the state.

"Along with mass vaccination drive at constituency level across the state, house to house testing of COVID-19 has also started at Imphal West today. Similar exercise will be taken up in other districts as well."

In-charge of house-to-house testing Dr Meena said that in Achanbigei area of Imphal East district, a total 152 persons from 47 households were tested, and 23 tested COVID-19 positive. In Takyel Khongbal area of Imphal West, 31 persons were found to be COVID-19 positive out of total 737 persons. Testing reports of other districts are yet to be received. The mass vaccination drive at Achanbigei was inspected by Chief Minister N Biren Singh, she added.

Another in-charge of house-to-house testing of the health department Dr Benedict informed that the house to house testing was conducted in Chandel district at Christian village, where 33 persons of seven households were tested, and the results were all negative.

At Oksu Ningthemcha village under Lamlai AC, Imphal East district, COVID-19 testing using Rapid Antigen Test (RAT) was started under the supervision of Imphal East CMO from Friday. A total 450 persons were tested, of which 48 tested positive for COVID-19. The village has around 350 households.

In the order of the health department, it was also stated that genome sequencing tests have shown that all new COVID-19 cases in the state were Delta Variants, which have higher transmissibility and possibility of adverse symptoms.

“Considering the critical situation, it is vital to collectively renew the efforts to break the chain of COVID-19 transmission. The special drive for house to house COVID-19 testing will be taken up by sending out mobile teams,” stated state chief secretary Rajesh Kumar in the order.

During the house-to-house testing drive organised jointly by district administration Thoubal, District Police Thoubal and District Health Society (DHS)-Thoubal at Wangjing Wangkhei and Wangjing Heituppokpi, 42 people of a total of 332 individuals were tested positive for the virus.

It may be mentioned here that in accordance with the announcement from CM Biren on Friday, and as part of the house to house testing campaign launched on Saturday, tests were conducted in 143 households in Tentha assembly constituency. A minimum of two individuals were selected for testing from each household with one family member who goes outside frequently and the other, someone who usually stays indoors.

In Jiribam, house-to-house testing also commenced in the district following the announcement made by chief minister N Biren Singh on Friday.

The testing was carried out at Ward No VIII of Chandrapur where around 20 persons were tested.

Meanwhile, a vaccination programme was also commenced at Meitei Naha Club (MNC) Ningthembam, Jiribam and Madrasa, Ahamadabad in a joint initiative by All Jiribam United Club Association (AJUCA) and other Covid Task forces under the aegis of district administration Jiribam and CMO Jiribam.

At MNC Ningthembam and Madrasa Ahamadabad where vaccinations were carried out, AJUCA provided face masks, hand sanitisers etc. Around 110 people were vaccinated during the programme.